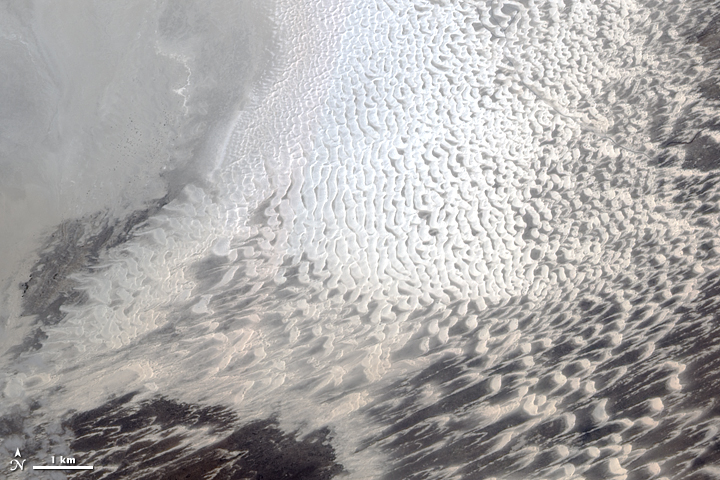 At the northern end of the Chihuahuan Desert, which stretches from the southwestern United States into northern Mexico, sits a field of gleaming white sands that form otherworldly dunes. The sands sprawl over some 715 square kilometers (275 miles) of south-central New Mexico. About 40 percent of the area falls within the White Sands National Monument, managed by the U.S. National Park Service.

The Advanced Land Imager (ALI) onboard NASA’s Earth Observing-1 (EO-1) satellite captured this photo-like image of part of the White Sands National Monument on June 27, 2009. This image shows part of the southeastern portion of the park. The dunes shown in this image are advancing toward the northeast, and the brilliant white sands contrast with darker soils.

The sands of White Sands National Monument are formed from gypsum, a soft mineral often left behind when water bodies evaporate. Although gypsum is a fairly common mineral, it is rarely found as sand because it easily dissolves in water, and rivers generally carry dissolved gypsum to the sea. Waters flowing into the basin holding White Sands National Monument, however, found no outlet and evaporated. Over many years, gypsum crystals deposited in this basin were subjected to freezing, thawing, and wind, and broke down into tiny grains.

The massive collection of gypsum dunes in New Mexico results from changes in ancient landscapes that started before the time of the dinosaurs. Some 250 million years ago, what is now New Mexico was covered by a shallow sea, but the sea’s level eventually fell as the area began to dry. Thick layers of gypsum settled onto the old sea floor. About 70 million years ago, the Rocky Mountains began to form, and a broad area—including the giant gypsum field—rose. Plate tectonic activity continued changing the region, and about 30 million years ago, a depression called the Tularosa Basin formed. This basin became the perfect receptacle for sediment washed off nearby mountains.

During the Pleistocene Ice age, especially between 12,000 and 24,000 years ago, the American Southwest enjoyed much more precipitation than it does today. The water washed gypsum from the San Andres and Sacramento Mountains into a huge lake that filled Tularosa Basin. Once again, however, the region dried and the lake evaporated, leaving behind massive quantities of gypsum. Probably about 6,500 to 7,000 years ago, the gypsum began to form dunes. The dunes of White Sands National Monument continue shifting today, some of them moving as much as 9 meters (30 feet) per year. The only plants that thrive in this desert are those able to grow fast enough to survive dune burial.