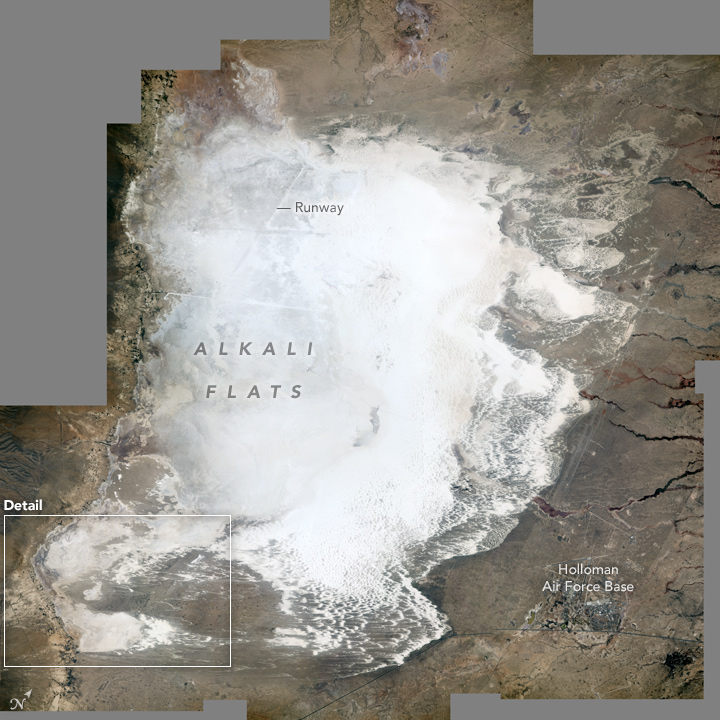 During the last Ice Age, melting snow and ice from the San Andres Mountains (west of the dunes) and the Sacramento Mountains (to the east) eroded minerals from the hillsides and carried them downhill to the basin below. Lake Otero formed on the spot. As the climate warmed and the water evaporated, the basin remained full of selenite (the crystalline form of gypsum) and created the Alkali Flats. Over time, winds broke the crystals into sand grains, which built up into the dunes visible in this mosaic of photographs taken by an astronaut from the International Space Station on June 20, 2016.

Today, that geological process continues. Gypsum-rich mountain waters flow down into the basin below, where the hot desert sun dries the water and winds break up newly formed selenite crystals. At the south end of the monument, occasional rains cause water to accumulate in Lake Lucero before evaporating. Because the basin has no outlet, gypsum here accumulates instead of getting pushed downstream and dissolving. 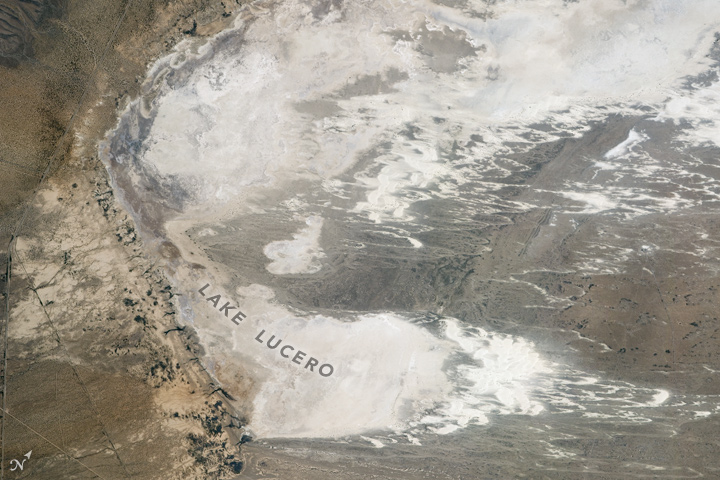 The soaptree yucca is one of few plants that grow in White Sands National Monument. It has adapted to grow tall, rising above the shifting sands. Native people used the yucca roots to wash clothes and rugs. Just outside the monument, many species of cacti dot the hills.

Like the soaptree yucca, a number of animals have adapted to this gypsum desert—in fact, some have evolved to be white like the dunes they inhabit. For instance, the Apache pocket mouse has fur lighter than that of its pocket mouse cousins. It is skilled at sucking the water out of seeds, and can go weeks without drinking water. Also pale, the sand-treader camel cricket digs in the sand with its specialized spines. Two species of the cricket are unique to White Sands, according to the National Park Service. Nearly 40 species of moth are also endemic (unique) to the national monument.

At the northern end of the scene, a gigantic “X” marks the spot of the White Sands Space Harbor. NASA began using one runway at Northrup Strip to train space shuttle pilots in 1976. The second runway was added later, and the harbor was used by NASA as a backup landing site.

Astronaut photographs ISS048-E-002950 through ISS048-E-002968 were acquired on June 20, 2016, with a Nikon D4 digital camera using a 800 millimeter lens, and is provided by the ISS Crew Earth Observations Facility and the Earth Science and Remote Sensing Unit, Johnson Space Center. The image was taken by a member of the Expedition 48 crew. The image has been cropped and enhanced to improve contrast, and lens artifacts have been removed. The International Space Station Program supports the laboratory as part of the ISS National Lab to help astronauts take pictures of Earth that will be of the greatest value to scientists and the public, and to make those images freely available on the Internet. Additional images taken by astronauts and cosmonauts can be viewed at the NASA/JSC Gateway to Astronaut Photography of Earth. Caption by Pola Lem.