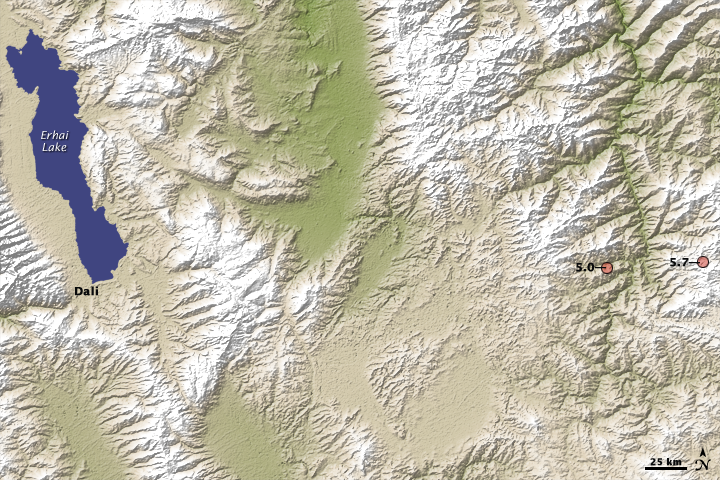 A magnitude 5.7 earthquake shook a remote region in southern China on July 9, 2009. The earthquake killed one person, injured hundreds, forced 400,000 evacuations, and destroyed more than 18,000 homes, reported the AFP news service on July 10. This image, made from data collected by the Advanced Spaceborne Thermal Emission and Reflection Radiometer (ASTER) on NASA’s Terra satellite, shows the topography of the earthquake region.

The earthquake and a magnitude 5.0 aftershock were centered in steep mountains on either side of a river valley in a sparsely populated part of the Yunnan Province. The nearest city is Dali, located about 100 kilometers (60 miles) west of the epicenter. The region is near the border with Burma (Myanmar), Laos, and Vietnam.

Like all of southern China, the region is prone to earthquakes because of the ongoing collision between the Indian plate and the Asian plate. India is moving north-northeast, putting pressure on the Asian plate. The pressure causes the land to fold, creating mountains. The mountains, their high elevation indicated in white, run roughly north to south through this scene.

The pressure also leads to faults (cracks or weak spots) in the rocks in Earth’s crust. When the land moves to accommodate the pressure, the Earth shakes. The whole of southern China experiences earthquakes related to tectonic motion. The July 9, 2009, earthquake occurred nearly 700 kilometers from the devastating 2008 earthquake in Sichuan province that killed nearly 87,000 people.

This image is from a new digital elevation model, released on June 29, 2009, that uses ASTER stereo images to produce a topographic map of Earth’s surface.