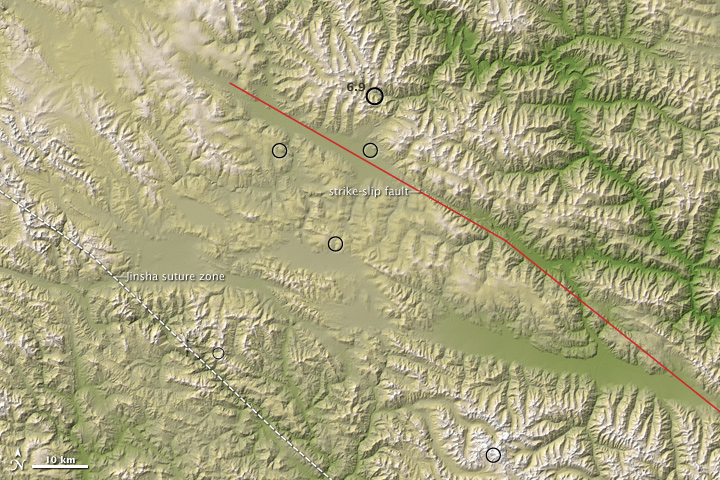 Earthquakes in the Tibet region result from the collision between the India Plate (to the south) and the Eurasia Plate (to the north). The convergence is responsible for raising the Himalaya and uplifting the entire Tibetan Plateau. A magnitude 6.9 earthquake struck the Tibetan Plateau in southern Qinghai Province, China, on April 13, 2010, killing hundreds of people and injuring as many as 10,000.

Based on data collected by the Shuttle Radar Topography Mission in 2002, this map shows the location of the quake and several aftershocks (black circles) as well as significant tectonic faults (red lines). A northwest-southeast valley provides evidence of the underlying geologic fault. The dotted line to the southwest traces the approximate location of a suture zone, which, as its name suggests, is an area where two continental plates have joined together.

As the India Plate pushes north, the eastern side of the Tibetan Plateau is getting bent and stretched toward the south-southeast. According to the U.S. Geological Survey, the quake occurred along a strike-slip fault, and it was one of the largest known earthquakes to have occurred within several hundred kilometers of the location.