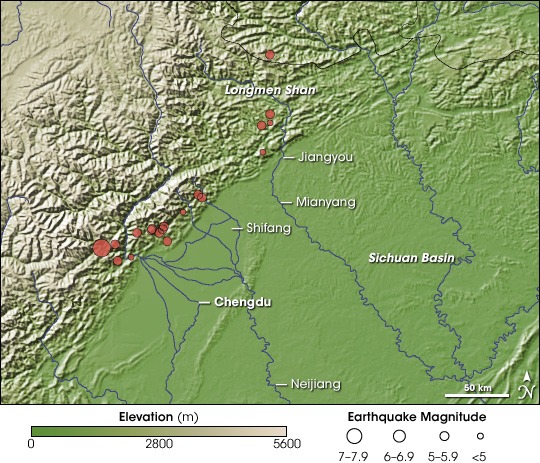 At 2:28 p.m. local time (06:28 UTC) on May 12, 2008, an earthquake with an estimated magnitude of 7.9 struck China’s Sichuan Province. The quake was felt throughout much of China, as well as parts of Taiwan, Thailand, and Vietnam. Within 24 hours, the death toll stood at 12,000, and was expected to rise significantly as search-and-rescue efforts continued.

This elevation map shows the region where the earthquake struck. Elevations—green indicating the lowest, and beige indicating the highest—are based on data collected by NASA’s Shuttle Radar Topography Mission (SRTM) flown in 2000. Overlain onto the map are earthquake magnitude indicators. The earthquake’s epicenter was approximately 90 kilometers (55 miles) west-northwest of the city of Chengdu. Smaller magnitude events occurred northeast of the epicenter, and generally followed the edge of the Longmen Shan mountain range.

Most earthquake activity in central and eastern Asia results from the steady northward push of the Indian tectonic plate into the Eurasian plate. The two plates converge with a velocity of about 50 millimeters a year, lifting up the Tibetan Plateau and helping to create the mountainous terrain pictured here. As the plates collide, the crust underlying the Tibetan Plateau moves west and encounters strong crust under the Sichuan Basin. On May 12, the resulting stress caused an upward movement along the Longmen Shan or other nearby fault on the Sichuan Basin’s northwestern margin.

Two chemical plants collapsed in Shifang, crushing workers and releasing 80 tons of liquid ammonia. Northwest of Chengdu, a multistory school collapsed on some 900 students, most of whom could not be saved. Afraid to return to their homes, locals endured aftershocks and heavy rains without shelter. The Sichuan quake was cited as the worst natural disaster to strike China since a 1976 earthquake destroyed the city of Tangshan in eastern China, killing more than 240,000.