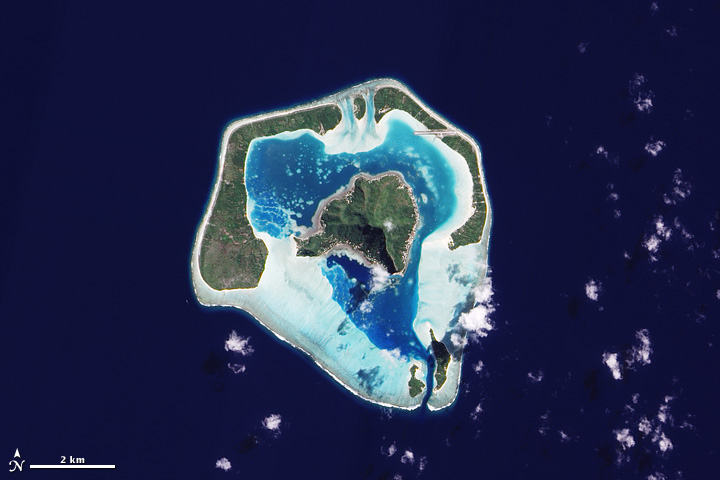 Spanning less than 10 kilometers (6 miles), Maupiti Island sits in the South Pacific Ocean, about 46 kilometers (29 miles) west of Bora Bora. The remote island lies 5,800 kilometers (3,600 miles) from Australia, and about 3,800 kilometers (2,400 miles) from New Zealand. Maupiti consists of a central island poking 213 meters (700 feet) above the sea surface, framed by low-profile serpentine islands and coral reefs that enclose a lagoon.

The Advanced Land Imager (ALI) on NASA’s Earth Observing-1 (EO-1) satellite captured this true-color image of Maupiti Island on August 8, 2009. The water inside the lagoon glows electric blue, surrounded by much paler blues of fringing coral reefs. Waves breaking on Maupiti’s southwestern shores appear brilliant white. Above the water line, forests carpet the islands. Only on the central island does the land rise high enough to cast a discernible shadow, and because this island sits in the Southern Hemisphere, the shadow falls to the south at this time of year. On the northeastern fringing island, the landing strip of a tiny airport cuts a long east-west line across vegetated land and coral reef.