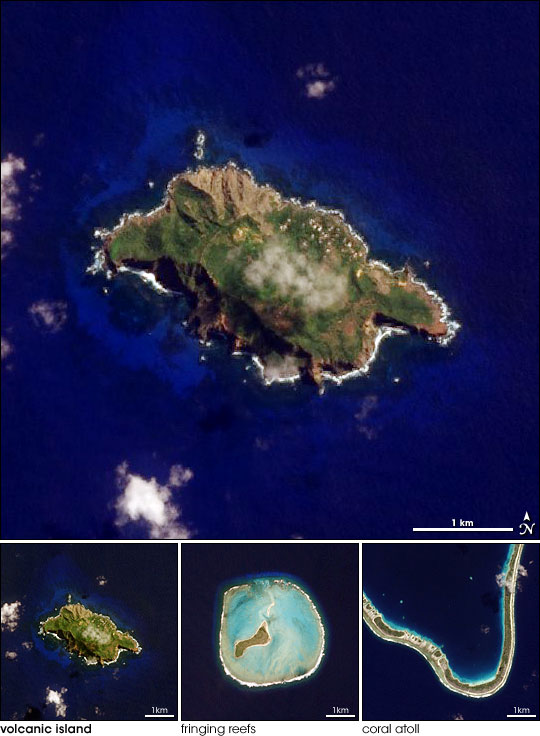 After exploring the South Pacific onboard the HMS Beagle, the young Charles Darwin theorized that the beautiful, low sandy islands built on coral reefs had started as rocky volcanic peaks. His theory, still accepted today, holds that reefs build around the outer edge of volcanic islands. In warm, tropical waters, the reefs constantly grow, while the island subsides until only the low, sandy reef remains. Samples of types of South Pacific islands that fueled Darwin’s theory are shown in this series of images, taken by the Advanced Land Imager on NASA’s EO-1 satellite between April and June 2006. The images show three types of islands in various stages of development: a volcanic island, an island with fringing reefs, and a coral atoll.

The youngest island is the volcanic island. Such islands are built up over weak spots in the Earth’s crust near boundaries between plates where molten rock seeps into the ocean eventually forming a rocky island. The island shown here is Pitcairn Island, the island on which the sailors from the British ship HMS Bounty settled after their mutiny in 1790. High cliffs surround most of the island, making access difficult—likely a primary reason the mutineers chose Pitcairn. The center of the island is green, covered with a dense forest. The island’s only inhabitants (descendants of the Bounty mutineers and their Tahitian companions) live in Adamstown, the bright spots near the northeast shore. A faint semi-circle around the top of the island traces out an ancient crater, evidence of Pitcairn’s volcanic past.

In the general pattern of island development in the tropics, coral begins to grow on the shallow, submerged portion of the volcanic island. Generation after generation of coral builds, each on top of the previous, until eventually they form a ring or partial ring of solid land, a fringing reef, around the island. The bright blue water around Pitcairn Island may be an indicator that a coral reef is building.

This image of Pitcairn Island was taken on April 5, 2006, as part of a Mid-decadal Global Land Survey. The purpose of the survey is to collect a set of cloud-free moderate- to high-resolution images between 2004 and 2007 that can be used as a reference point for the period. Scientists use such surveys to study a variety of things, ranging from changes in vegetation over time to the impact of urbanization. For example, in June 2006, an international team of scientists published a paper in the journal Science, which used images from a similar NASA-funded mapping project called the Millennium Coral Reef Mapping Project to determine how well the world’s coral reefs are being protected. The group found that less than two percent of the world’s coral reefs fall within designated protected areas.