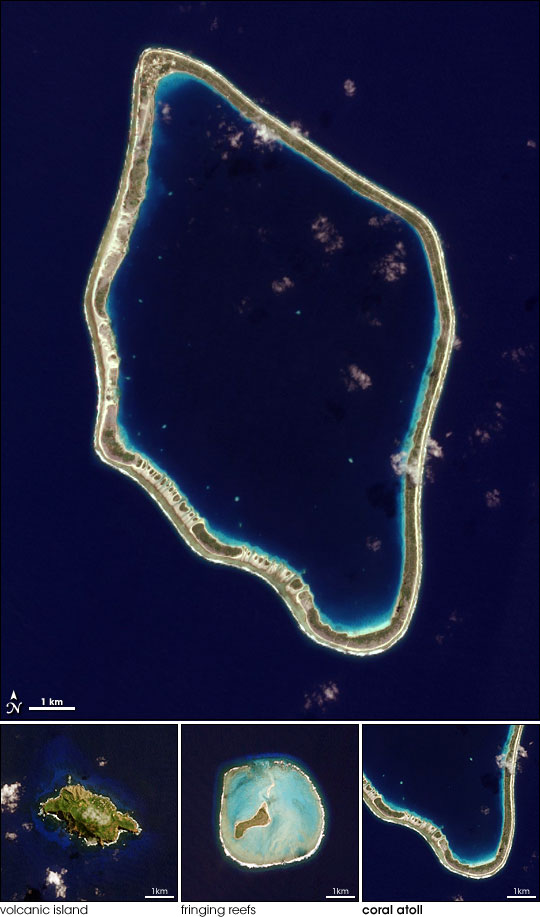 If you asked almost anyone to describe a tropical island, they would likely mention palm trees and flat, white sandy beaches that stretch for kilometers: they would describe a coral atoll. Coral atolls are normally long, thin bars of white sand that rise just a few meters above sea level. The island or island group surrounds a hollow center where a volcanic peak once was. The atoll shown in this photo-like satellite image is the island of Tureia, in French Polynesia, about 930 kilometers northwest of Oeno Island and 1,120 kilometers northwest of Pitcairn Island, both in the Pitcairn island group. The beaches shown here get their light color from the calcium-rich skeletons of coral and other reef dwellers. The soil built on top of the reef supports limited vegetation including coconut palms, taro, and breadfruit trees, the strips of green shown here.

In 1842, Charles Darwin theorized that coral atolls had started out as volcanic peaks. Rocky and often steep, such peaks bear little resemblance to the low, sandy atolls, but Darwin believed that coral colonized the submerged edge of the volcano. Over time, a solid reef rose up and grew out from the volcanic island, forming a fringing reef. Eventually, after the hotspot the fueled the volcanism shifted away, the volcanic peak began to sink and erode. At the same time, the reef continued to grow. Eventually, the peak sank beneath the water, leaving only the reef in place. At this point, the island became a coral atoll. Darwin formulated this theory of island evolution, which is still generally accepted today, based on his observations of Pacific islands made during the five-year voyage of the HMS Beagle.

This image of Tureia was taken on June 7, 2006, by the Advanced Land Imager on NASA’s EO-1 satellite as part of a Mid-decadal Global Land Survey. The purpose of the survey is to collect a set of cloud-free moderate- to high-resolution images between 2004 and 2007 that can be used as a reference point for the period.