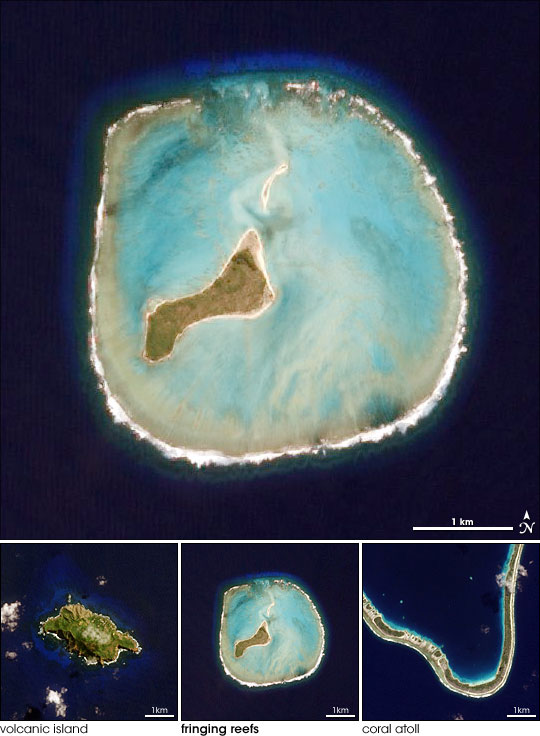 A bright strip of sand surrounds a pale blue lagoon and the remnants of a volcanic peak on Oeno Island. Sitting approximately 280 kilometers northwest of Pitcairn Island in the South Pacific, Oeno is a prime example of a tropical island in the middle stages of its development. Like Pitcairn, Oeno started out as a rocky volcanic peak. Over time, coral colonized the submerged edge of the island, each generation building up and out from the last until a solid ring of coral, called a fringing reef, circled the island. Sand made from the calcium-rich skeletons of coral and reef dwellers creates the brilliant white beaches seen along the outer edge of the fringing reef.

Eventually, the volcanic hotspot that fueled Oeno’s initial growth shifted, and the central rocky mass began to sink and erode, leaving a shallow, pale blue lagoon in its place. A heavily eroded remnant of the island’s volcanic peak still rises above the surface in the southwest corner of the lagoon. When the center peak is entirely gone, only the reef will remain, and the island will become a coral atoll.

In addition to the theory of biological evolution, Charles Darwin also formulated this theory of tropical island evolution from volcanic mount to coral atoll as a result of observations made during his five-year voyage on the HMS Beagle. The voyage allowed the young Darwin to see islands in various stages of development throughout the South Pacific.

This image of Oeno was taken on June 16, 2006, by the Advanced Land Imager on NASA’s EO-1 satellite as part of a Mid-decadal Global Land Survey.