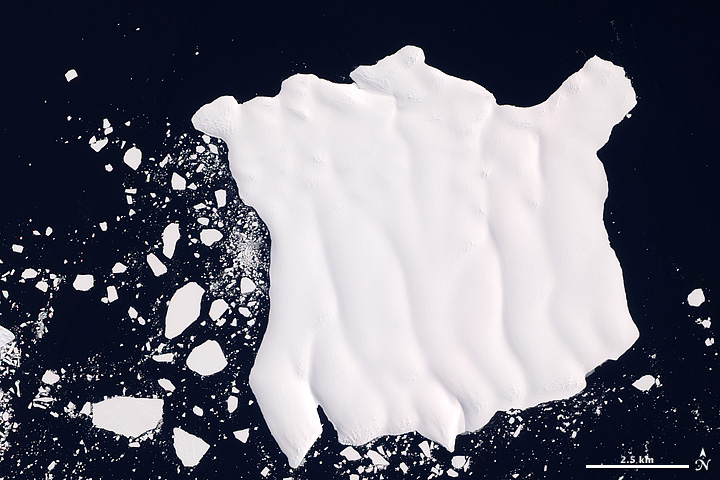 The Mertz Glacier flows off East Antarctica along the George V Coast. The glacier forms a long, narrow tongue that terminates in the ocean, pointing in the general direction of Australia and New Zealand. A European satellite image of the entire glacier tongue shows the ice body’s rugged surface. Deep cracks—crevasses—give the glacier tongue its rough texture.

The Mertz Glacier routinely calves icebergs into the Southern Ocean, and on January 10, 2010, the Advanced Land Imager (ALI) on NASA’s Earth Observing-1 (EO-1) satellite captured this true-color image of an iceberg that had broken off the glacier tongue. Similar to the glacier that spawned it, this iceberg sports a rippled surface, accentuated by the Sun’s relatively low elevation in the sky when the image was collected. Measuring roughly 8.5 by 9.5 kilometers (5 by 6 miles), this iceberg is surrounded by smaller chunks of ice, which may have broken off the Mertz Glacier Tongue at the same time as the large iceberg, or after it calved.

Icebergs that calve off Antarctica’s coast are often swept up by ocean currents circling the continent, and may remain relatively intact for months or years, so long as they remain in sufficiently cool conditions. Some icebergs, however, drift north to warmer climates and disintegrate. By observing the response of an iceberg to a warmer climate at a lower latitude, scientists can make predictions about how ice shelves—thick slabs of ice attached to coastlines—might respond to a warming climate. The AMIGOSberg Project entailed such a study.