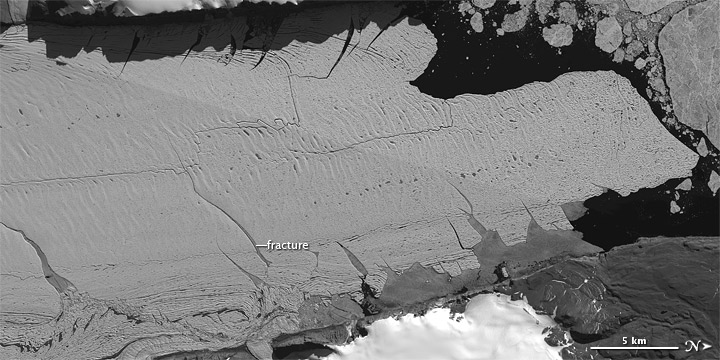 The Petermann Glacier in northwestern Greenland terminates in a floating ice tongue. Days before a massive ice chuck broke off the glacier, cracks were visible on the glacier surface. This high-resolution image of the Petermann Glacier was acquired on July 22, 2010. (This image has been rotated so north is at right.) The long, thin fracture extending from the eastern side of the glacier toward the middle of the ice tongue occurs where the ice chunk later detached and began to float out to sea.

Little of the glacier ice remains in contact with the fjord walls downstream from the long, thin fracture. The minimal ice-fjord contact suggests that, once cracks spanned the width of the ice tongue, contact with fjord walls wouldn’t hinder the ice island’s movement.

Upstream (image left) another rift appears. This fracture was visible in September 2008. The friction between the flowing glacier and the fjord walls can create multiple fractures, but not every fracture necessarily extends across the entire glacier and leads to iceberg calving. The extent of contact between the glacier ice and surrounding fjord walls plays a role in whether new ice islands form, and the upstream fracture occurs in an area where much of the glacier ice remains in contact with the fjord.

Image from WorldView-2 © 2010 by DigitalGlobe. Courtesy of Ian Howat, Byrd Polar Research Center, the Rapid Ice Sheet Change Observatory (RISCO) of Ohio State University, and the University of Minnesota. Caption by Michon Scott, based on image interpretation by Ian Howat.