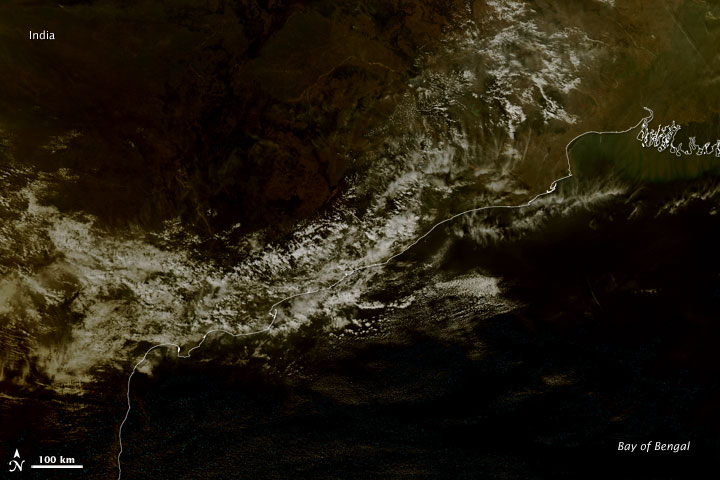 On January 15, 2010, the Moon passed between the Earth and the Sun. As the Moon blocked just the central portion of the Sun, people looking skyward would have seen a fiery ring around the Moon’s perimeter, what is known as an annular eclipse. Looking down from space at 1:15 p.m. Calcutta time (7:45 UTC) on January 15, 2010, the Moderate Resolution Imaging Spectroradiometer (MODIS) on NASA’s Aqua satellite saw the Moon's shadow falling on India and the Bay of Bengal.

The shadow spanned a north-south distance of about 300 kilometers (185 miles) on the surface, with the darkest part near the mid-point of the span. Even in the darkest part of the shadow, clouds are so reflective that the small amount of sunlight escaping around the edge of the moon’s disk is enough to illuminate them for MODIS’ view. Farther north in India, closer to the shadow’s edge, the surface appears tea-colored. A white line delineates the coastline.

The shadow followed a roughly west-to-east arc from central Africa to eastern China. At the height of the eclipse, which occurred over the Indian Ocean, the complete disk of the moon was visible against the Sun for 11 minutes and 8 seconds, making this event the longest annular eclipse anticipated for the next millennium.