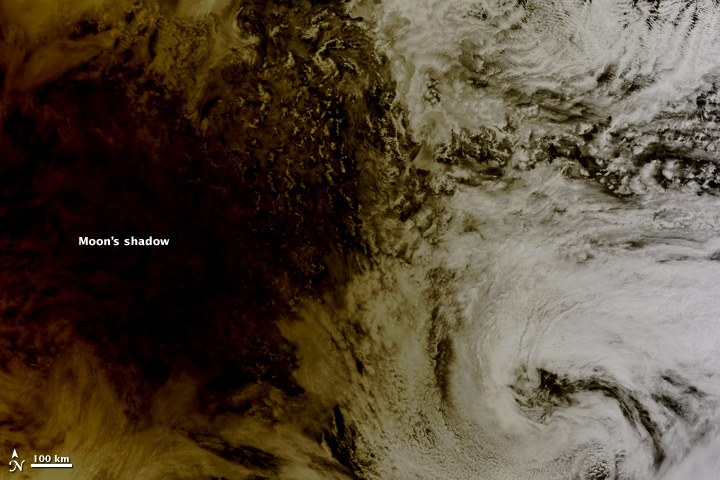 On May 20, 2012, sky watchers from eastern Eurasia to western North America saw a fiery ring around the Moon as it passed between the Sun and the Earth. Known as an annular eclipse, the event blocked sunlight across a swath of Earth up to 300 kilometers (185 miles) wide, and the effects were most dramatic across the northern Pacific Ocean.

As people on the ground looked up at the sky and saw a ring, the Moderate Resolution Imaging Spectroradiometer (MODIS) looked down and saw the Moon’s shadow racing eastward over Earth’s surface. The MODIS instrument on NASA’s Terra satellite captured this natural-color image of the shadow on the Pacific Ocean at roughly 11:30 a.m. local time on May 21 (23:30 Universal Time on May 20).

Where the Moon passed in front of the Sun, Earth’s surface appeared black (left half of image). Around the margins of the shadow, our planet’s surface appeared yellowish brown. The shadow cast by an eclipse consists of two parts, the completely shadowed umbra and the partially shadowed penumbra.

During this eclipse, the Moon’s apparent diameter was 94 percent of the Sun’s, showing viewers on the ground a bright ring of light. Whether they could see the full eclipse or just a partial eclipse, millions of people turned out to see the show and many posted their photos online.