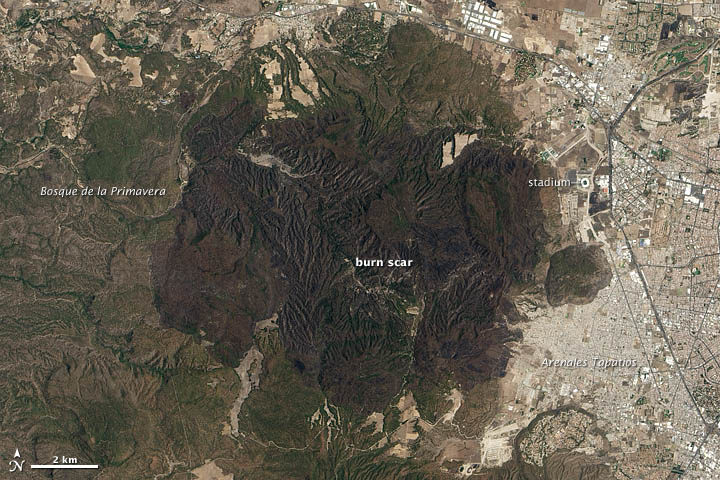 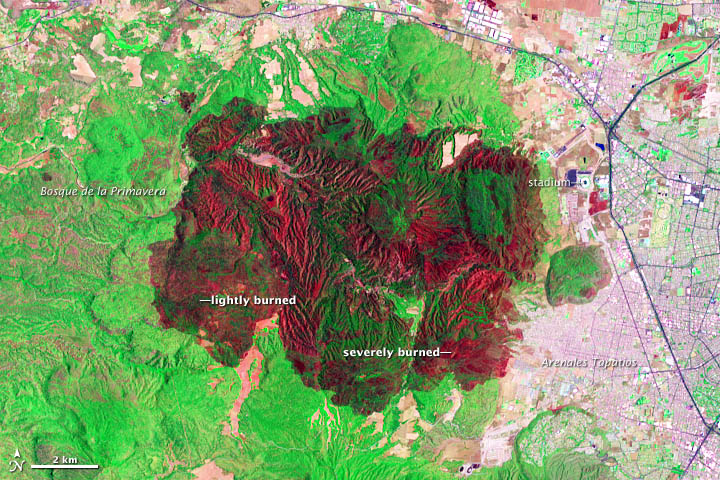 In April 2012, a fire in Mexico left a swath of charred land across the Bosque de la Primavera, a forested park just west of the country’s second largest city, Guadalajara. The fire damaged more than 8,500 hectares (33 square miles), about one third of the park.

The Advanced Land Imager (ALI) on NASA’s Earth Observing-1 (EO-1) satellite captured the natural-color view (top) of the burn scar on May 14, 2012. Damage is visible along the eastern edge of the park near Guadalajara’s Arenales Tapatios neighborhood and stretches north and west across the pine- and oak-dominated forest. Though the fire did not damage structures in the city, it burned close to homes in Arenales Tapatios and was within a few kilometers of a stadium built for the 2011 Pan American games.

The false-color image (bottom) also was acquired by ALI, but it shows greater contrast between burned and unburned vegetation because it is based on data from the shortwave infrared portion of the electromagnetic spectrum. The most severely burned areas are brick red; lightly burned areas appear darker green or black. Unburned forest appears fluorescent green. The false-color shows that burning was not uniform and that severe burning occurred near Arenales Tapatios.

According to the Guadalajara Reporter, government officials believe the blaze started in Arenales Tapatios with people burning garbage at an illegal dump. It isn’t clear why or how the blaze got out of control, but officials have not ruled out the possibility that people spread the fire intentionally. The fire began near a squatters’ camp where last year officials extinguished fourteen fires that were likely set intentionally.

The fire also burned in an unusual way. It reemerged suddenly at one point, even after it had been largely controlled. Firefighters also encountered armed gangs along the edge of the forest that temporarily prevented them from battling the blaze. Although the park is federally protected land, about 85 percent of it is privately owned and Mexico’s Environment Secretary expressed concern that real estate developers wanting to build on its edges may have been involved in the fires. Drug traffickers have also reportedly set up clandestine labs along the edge of the forest and may have played a role, according to officials. 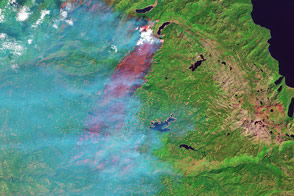