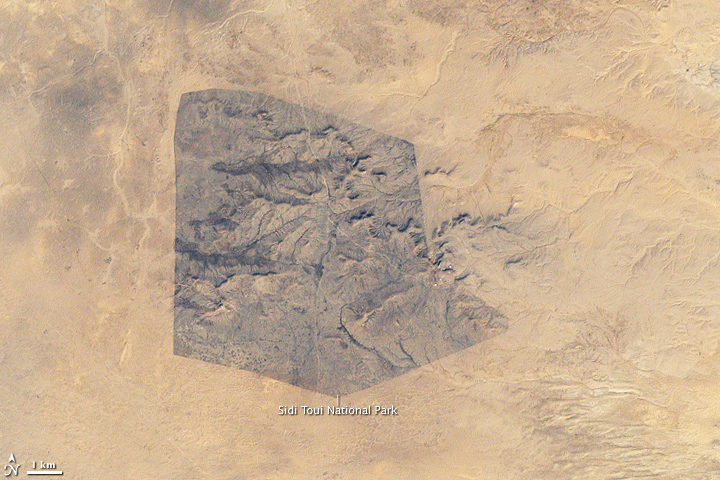 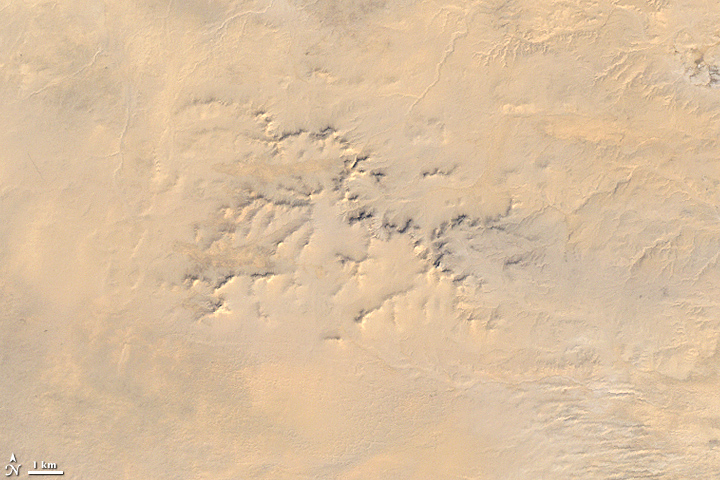 Tunisia lies along Africa’s Mediterranean coast, and the country’s coastal Atlas Mountains gradually give way to the northern margin of the Sahara Desert. In this arid land, agriculture and livestock grazing can easily push the landscape toward desertification, and Saharan sands encroach upon 8,000 hectares (nearly 20,000 acres) each year. As a consequence, restoring native grasslands in Tunisia takes concerted effort, but Sidi Toui National Park marks a victory in such restoration.

Sidi Toui National Park is in the southern half of Tunisia, in a relatively mountainous area close to the Libyan border. The site includes salt flats and seasonally dry river channels surrounding a low hill known as Djebel Sidi Toui. The Enhanced Thematic Mapper Plus (ETM+) instrument on NASA’s Landsat 7 satellite acquired these images of Sidi Toui and its surroundings on January 2, 1987 (bottom), and December 13, 1999 (top). In these photo-like images, the region’s landscape appears in alternating shades of beige, brown, and gray. Taken at approximately the same time of year, the images show a largely unchanged landscapeâ€”with the exception of the park.

The 1987 image shows a region pushed toward desertification by the combined pressures of drought, agriculture, and overgrazing. In the 1999 image, the area’s native vegetation had begin to return inside the park’s protected borders. The park’s area is easily discerned by the revived grassland, which appears as a deep shade of brown. The grassland’s brownish hue results partly from dry wintertime conditions, and partly from the region’s overall aridity.

Sidi Toui National Park was established in 1993, and as the native vegetation returned, so did a number of bird species. In 1999, local authorities introduced a small population of Scimitar-horned oryx. Prior to the park’s establishment, this and several other antelope and gazelle species had been driven nearly to extinction by habitat loss.

Sidi Toui National Park is in the southern half of Tunisia, in a relatively mountainous area close to the Libyan border.