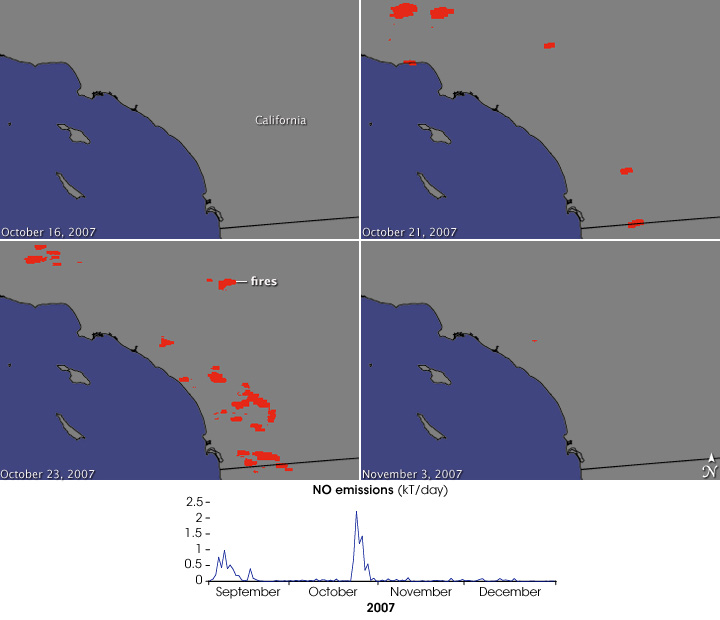 You don’t have to be nearby to know when wildfires burn through remote forests in the U.S. West. Even far from the fire, the Sun turns orange as its light reaches through a brown-tinted sky, and a faint hint of smoke flavors the air. It’s no surprise that the choking smoke is a health hazard up close, but it may pose a risk to those farther away who see little or no smoke. A recent study conducted at the National Center for Atmospheric Research found that distant wildfires can raise ground-level ozone concentrations to unhealthy levels even at large distances from the fire location.

The study, led by Gabriele Pfister, tracked the effect of fires in southern California in 2007 on surface ozone levels. In October 2007, drought and the Santa Ana winds combined to create extreme fire conditions. Large fires raged across southern California, as shown in this series of images. The fires, detected by the Moderate Resolution Imaging Spectroradiometer (MODIS) on NASA’s Terra and Aqua satellites, are marked in red. As shown in the graph and these images, the estimated levels of nitrogen monoxide (NO) released by the fires and fire activity both peaked around October 23.

Released by burning, nitrogen oxides are among the components of smoke that leads to the formation of ground-level ozone. Ground-level ozone can make breathing difficult, particularly for children, older adults, and people with lung disease or asthma. It irritates the skin, and can cause chest pain, throat irritation, coughing, congestion, and may, with repeated exposure, scar the lungs. Ozone damages plant leaves, potentially reducing growth. For these reasons, the Environmental Protection Agency (EPA) sets strict limits on ground-level ozone concentrations, limits that were exceeded in southern California during the October 2007 fires. But were the fires really responsible for the rise in ground-level ozone?

Pfister and her colleagues fed the MODIS fire detections into a model that estimated how much and what kind of vegetation burned based on the fire location and time of year, and how much nitrogen oxides, sulfur dioxide, and other gases were released as a result. Then they tracked the spread and chemical evolution of these gases with a global air chemistry model. The model predicted the formation of ozone as the smoke plumes moved downwind. Pfister and her colleagues matched their predictions to measurements of ground-level ozone from EPA ground stations throughout California and showed that ozone levels increased as a direct result of the fires. The fires caused ground-level ozone to spike to unhealthy levels repeatedly, particularly in rural areas, but also in cities.

Fire-induced spikes in ground-level ozone and the resulting health problems could become more of a problem as global warming progresses. â€œStudies show that wildfires are expected to worsen in the future, especially as our climate grows warmer,â€ Pfister says. â€œBut we are only now beginning to understand their potential impacts on people and ecosystems, not only nearby but also potentially far downwind.â€

Pfister has long been interested in understanding the impact smoke can have on air quality. In a 2005 study, she found that smoke from wildfires in Alaska had affected large areas in the contiguous United States and had reached as far away as Europe. See Tracking Nature’s Contribution to Pollution on the Earth Observatory. Pfister also discussed her research on smoke transport on EarthSky’s radio program Clear Voices for Science.

Image courtesy Jesse Allen based on data from the MODIS Science Team and Gabriele Pfister. Caption by Holli Riebeek.

Wildfires can raise ground-level ozone concentrations to unhealthy levels even at large distances from the fire location.