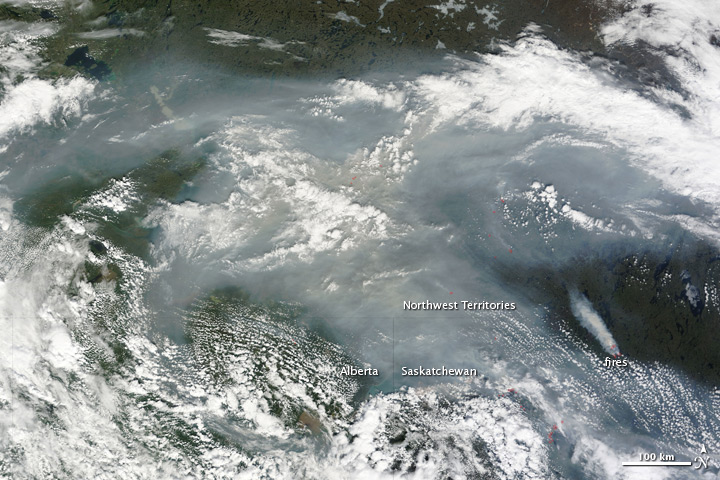 Lightning-ignited fire is a natural part of the lifecycle for the boreal forest of Canada. Fires burn through the forest, clearing dead trees and undergrowth, returning nutrients to the soil, and paving the way for new trees. A boreal forest is richly diverse because fire creates a varied landscape, checkered with old and new growth, that provides a wide range of habitats. But the burning boreal forests have a much wider impact: dense smoke from the fires can travel hundreds of kilometers, affecting air quality far from the flames.

The Moderate Resolution Imaging Spectroradiometer (MODIS) on NASA’s Terra satellite captured this image of smoke over the Northwest Territories, Alberta, and Saskatchewan on June 26, 2010. Small red boxes outline the locations of active fires. Additional fires likely burn beneath the clouds and smoke, out of the instrument’s view. The scattered fires sent thick smoke across hundreds of kilometers. The gray-brown cloud of smoke is dense enough to entirely obscure the ground in places.

While smoke itself makes for unhealthy air, it can also raise ground-level ozone concentrations to unhealthy levels far from the fire. Smoke contains nitrogen monoxide, an ingredient in creating ozone. Ground-level ozone can make breathing difficult and irritate the skin and throat. Parts of the northeastern United States, from Indiana to Maryland, experienced poor air quality on June 26, likely as a result of the fires, said the U.S. Air Quality Smog Blog.

Thick smoke spread across hundreds of kilometers, affecting air quality in Canada and the United States in late June 2010. The smoke is from fires burning in boreal forests of north-central Canada.