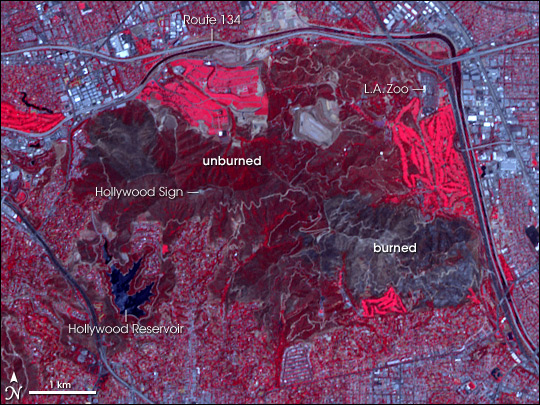 In mid-May 2007, wind-driven flames raced through Griffith Park in Los Angeles, forcing hasty evacuations and threatening numerous famous landmarks and tourist spots, such as the Los Angeles Zoo and the Hollywood Sign. Ultimately, no one was injured in the fire, which may have been started by a cigarette. About 800 acres burned in the urban park, which is itself a Hollywood landmark, having been the location for several movies, including Rebel Without A Cause.

This image of the park was captured by the Advanced Spaceborne Thermal Emission and Reflection Radiometer (ASTER) on NASA’s Terra satellite on June 6, 2007, about a month after the fire. ASTER detects both visible and infrared wavelengths of light, and both kinds have been used to make this image. Vegetation appears in various shades of red, while the burned areas appear charcoal. Roads and dense urban areas appear purplish-gray or white. Water is dark blue.

Large burned areas are evident in the northwest and southeast parts of the park, with scattered smaller patches along the southern margin. Some botanical gardens and parts of a bird sanctuary, as well as some park structures like restrooms, were destroyed. The park’s unburned, natural vegetation appears brick red, while the irrigated golf courses adjacent to the park are bright red.