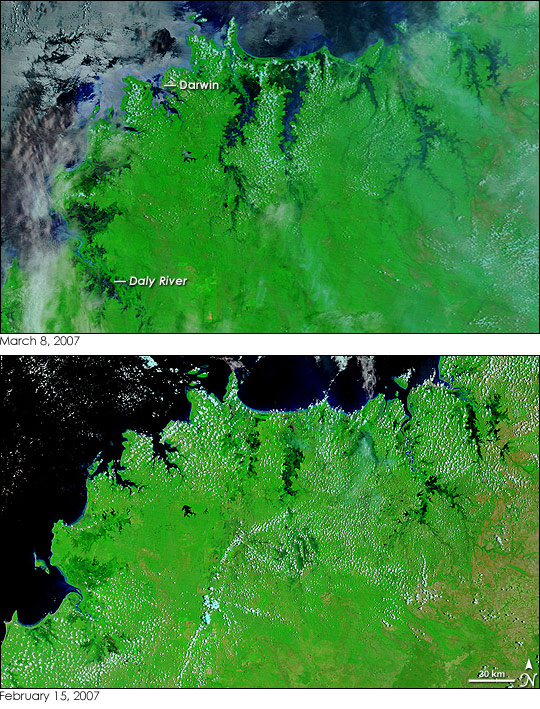 Though Cyclone George was a very weak storm when it passed over Australia’s Northern Territory on March 1 and March 2, 2007, it brought widespread rain and high tides to the region. The rain and tides triggered floods along the coast and in river systems, which are shown in the top image, captured by the Moderate Resolution Imaging Spectroradiometer (MODIS) on NASA’s Terra satellite on March 8. The lower image, taken on February 15, 2007, shows the area before the storm came ashore. In these images, made with visible and infrared light, water is black or dark blue. Most striking in the March 8 image are the dark pools of water along the coast and in coastal inlets. The wetlands that jut in from the northern shore have expanded into wide, triangular rivers. To the southwest, the Daly River and nearby wetlands are also flooded.

Signs of flooding are also visible in the Indian Ocean. Though sunlight reflecting off the water makes the color hard to distinguish, the water near shore is blue, not black as it was in February. When flood water drains into the ocean, it carries sediment from the run-off. The sediment scatters light, lending the water the blue color seen here. Clouds in this type of image are pale blue and white.

According to the Australian Broadcasting Corporation News, the floods swamped the rail line that connects Darwin to southern Australia, cutting off rail travel. The floods also inundated the small community of Oenpelli, in the upper right corner of the image. By March 8, when the image was captured, the floods had started to recede. Daily images of the flood area are available from the MODIS Rapid Response System.