Today’s Image of the Day is the answer to the May puzzler.

In southern Mongolia, a series of narrow ranges—the Gurvan Saikhan Mountains and the Tost Mountains—run roughly parallel to the China-Mongolia border. A network of ephemeral streams wind their way through the rocky ranges wherever the terrain allows.

After heavy rainfall, floodwaters rush through narrow stream channels deep inside the ranges. Soon enough, a transition to flatter terrain allows floodwater to spread out into a series of braided streams with interwoven channels.

On August 17, 2014, the Advanced Spaceborne Thermal Emission and Reflection Radiometer (ASTER) on NASA’s Terra satellite acquired this image of some of these interlocking stream channels just south of the Tost Mountains. This sparsely populated region is known for its relatively large population of endangered snow leopards.

As the streams pass beyond the mountains, water slows down considerably as the channels widen. As it does, gravel, sand, and clay (alluvium) gets dropped into sandbars. Over time, the channels and sandbars migrate back and forth to create triangular deposits known as alluvial fans.

In the case shown above, several closely spaced alluvial fans have coalesced into a larger feature known as a bajada. (Spanish for “descent”.) Bajadas typically form in areas where descending streams flow down the lower slopes of mountains, usually in areas with slopes of 7 degrees or less.

Over time, the many channels chiseled a few meters into the surface and spread to be tens of meters wide. Geologic research indicates that the channels near the Tost Mountains are filled with a coarse sediment that was likely deposited during a cool, dry period between 23,000 and 9,000 years ago, when sudden flash floods were more common than they are today.

These channels lead south toward the Gaxun Nur basin. Though the the basin once held a lake that covered more than 200 square kilometers (80 square miles), it dried up in the 1960s because too much water was diverted for irrigation. Since then, an effort to restore the basin’s lakes and wetlands that began in the 2000s has increased the amount of inflowing water. 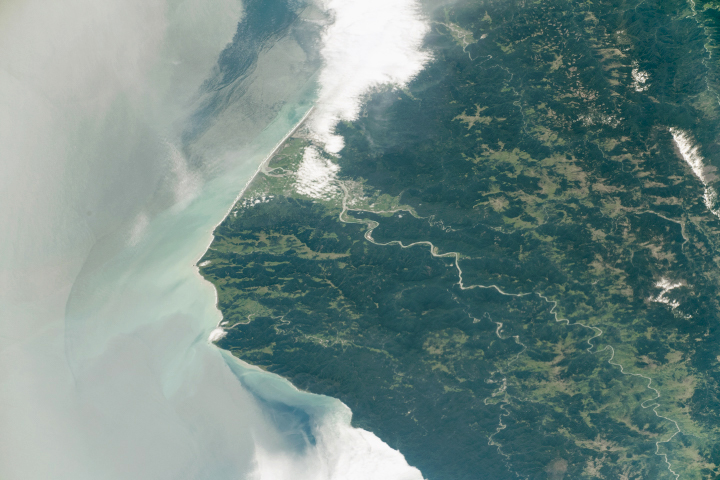 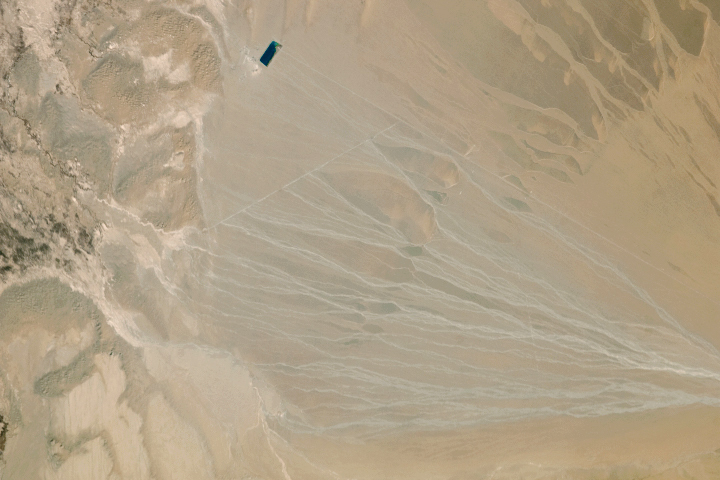 Water from the Kunlun Mountains carves thin channels across the dry lands of Western China.