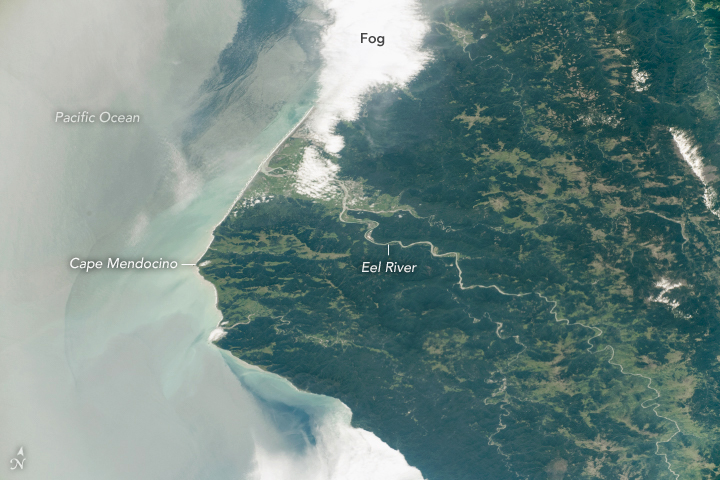 While orbiting over the U.S. West Coast, an astronaut on the International Space Station took this photograph of Humboldt County in northern California. Forests make up most of the dark green landscapes. Many of the lighter green areas are wetlands along coastal river estuaries.

The Eel River flows through mountainous terrain and meets the Pacific Ocean near Eureka, California. Located just north of the Eel River outlet, the city is obscured by its notorious fog.

The climate of Humboldt County is persistently wet, with temperatures rarely exceeding 80° Fahrenheit (27° Celsius) year-round. The rainy season comes during the winter, with roughly 75 percent of the annual rain falling between November and March. Thick summer fog brings essential moisture to the famous redwood forests during relatively dry summer months.

The region’s airport was originally built as a Naval Air Station to test military defogging equipment during World War II. Later the runways were used for military experiments for low-visibility landings. The airport is still used today for commercial flights.

Large faults run through Cape Mendocino and off the coast. Humboldt County is subject to high seismic risk due to its close proximity to a triple junction, where the Pacific, North American, and Gorda Plates meet just offshore. Earthquakes also put this coastline at risk for tsunamis and landslides.

Astronaut photograph ISS059-E-35737 was acquired on April 25, 2019, with a Nikon D5 digital camera using a 210 millimeter lens and is provided by the ISS Crew Earth Observations Facility and the Earth Science and Remote Sensing Unit, Johnson Space Center. The image was taken by a member of the Expedition 58 crew. The image has been cropped and enhanced to improve contrast, and lens artifacts have been removed. The International Space Station Program supports the laboratory as part of the ISS National Lab to help astronauts take pictures of Earth that will be of the greatest value to scientists and the public, and to make those images freely available on the Internet. Additional images taken by astronauts and cosmonauts can be viewed at the NASA/JSC Gateway to Astronaut Photography of Earth. Caption by Andrea Meado, Jacobs Technology, JETS Contract at NASA-JSC.

The climate of Humboldt County is persistently wet, with legendary fog that has helped the trees and the military.

The smallest country in mainland Africa hugs its namesake river.