A weekend of wet weather has swamped northern California with heavy, record–breaking rains.

Rain that fell over April 7–8, 2018, forced the San Francisco Giants to cancel their season opening baseball game for the first time in twelve years. Yosemite Valley also closed due to flooded roads. However, the deluge should help northern California avoid drought and water shortages as the state enters the dry, summer months.

The downpour was caused by an atmospheric river, a narrow stream of air that transports tremendous amounts of moisture over long distances. Atmospheric rivers are vital for replenishing water supplies in the U.S. West Coast, where they contribute about 30 to 50 percent of the region’s annual precipitation. The moisture flowed from the tropical Pacific near Hawaii, making this atmospheric river an example of a “Pineapple Express.”

The Pineapple Express brought more moisture to northern California, in the form of precipitable water, than any other winter storm on record. Precipitable water is the amount of water that would fall if every drop of moisture in an air column fell.

The animation above shows how much rain the storm dropped as it moved from Hawaii toward northern California. It shows rainfall accumulation every 30 minutes from midnight on April 1 to midnight on April 11. These rainfall data are remotely-sensed estimates that come from the Integrated Multi-Satellite Retrievals for GPM (IMERG), a product of the Global Precipitation Measurement mission. The GPM satellite is the core of a rainfall observatory that includes measurements from NASA, the Japan Aerospace Exploration Agency, and five other national and international partners. Local amounts can be significantly higher when measured from the ground.

Last year’s wet season (from October 2016 to March 2017) had 45 atmospheric rivers, one-third of which were ranked as “strong” or “extreme” by the Center for Western Weather and Water Extremes at Scripps Institution of Oceanography at University of California San Diego. This year had fewer, with an unusually quiet February. Before the event in April, California had only one other strong rain event, which occurred in late-March. 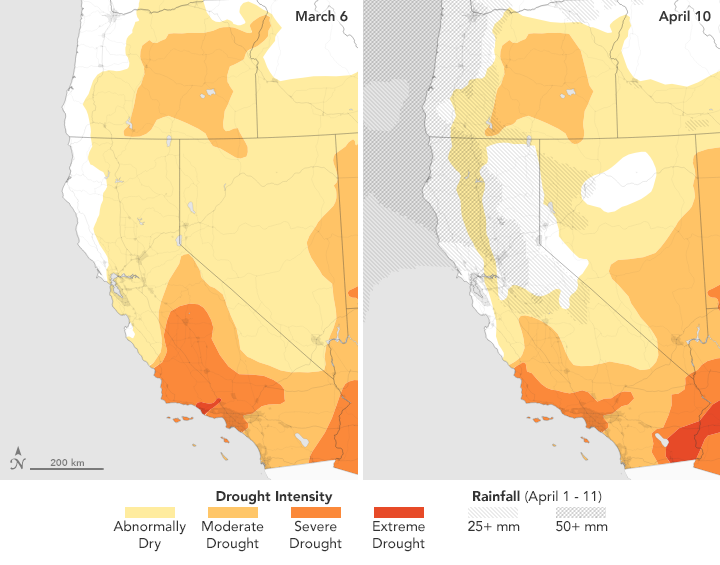 “These storms in March and early April really aided the area, especially in northern California,” said David Miskus, a National Oceanic and Atmospheric Administration meteorologist who creates maps for the U.S. Drought Monitor. As seen in the maps above, drought conditions improved for two-thirds of northern California and the Sierra Nevada area since the March and April events. Conditions worsened in southern California, which was not hit by this most recent atmospheric river.

The maps were developed by the U.S. National Drought Monitor, a partnership of U.S. Department of Agriculture, the National Oceanic and Atmospheric Administration, and the University of Nebraska-Lincoln. They depict areas of drought in progressive shades of orange to red. The maps are based on measurements of climate, soil, and water conditions from more than 350 federal, state, and local observers around the country.

Miskus said that even if California does not receive additional rain this year, which is a possibility as the state heads into the summer, water supplies should be in good shape because of these late-season storms and the strong season last year. As of April 11, 2018, twelve of California’s major reservoirs were at or above the historical average for this time of the year.

NASA Earth Observatory images by Joshua Stevens, using data from the United States Drought Monitor at the University of Nebraska-Lincoln and IMERG data from the Global Precipitation Mission (GPM) at NASA/GSFC. Story by Kasha Patel. 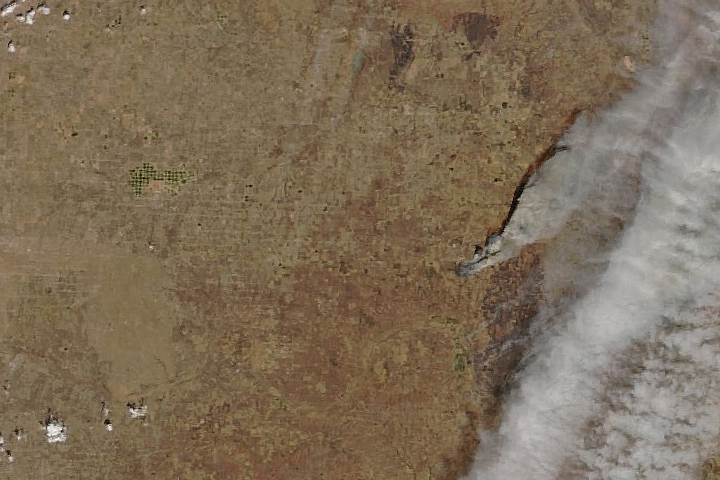