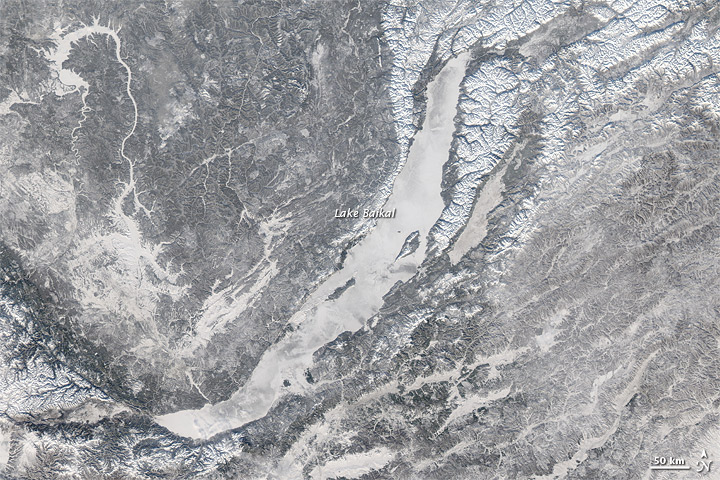 Ice on Lake Baikal is not at all unusual in January. The ice that forms on the lake is generally quite strong, even strong enough to support the weight of vehicles driving over the surface. Runners also rely on the ice to support their weight in the Lake Baikal International Ice Marathon.

Although the ice on Lake Baikal is often thick in January, the lake rarely freezes early in the fall. The lake’s considerable volume enables it to retain heat accumulated during the summer months throughout the autumn season. In extremely cold conditions, however, the lake may freeze as early as December.

Lake Baikal (also known as Ozero Baykal or Ozero Bajkal), is the world’s oldest and deepest freshwater lake. At roughly 395 miles (635 kilometers) long, with an average width of about 30 miles (50 kilometers), it is also the world’s largest freshwater lake by volume, holding as much fresh water as North America’s Great Lakes combined. Surrounded by mountains, the lake occupies a rift where parts of the Earth’s crust as wrenching apart. Geologists value the lake for what it can reveal about the development of ocean basins. 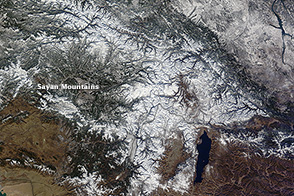 A blanket of white spread across the Sayan Mountains.