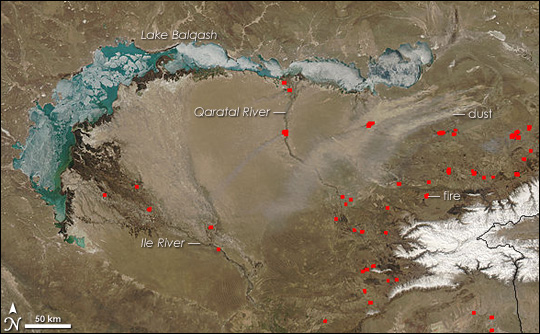 Spring was clearly settling over southern Kazakhstan by March 30, 2008, when the Moderate Resolution Imaging Spectroradiometer (MODIS) on NASA’s Aqua satellite captured this image. The snow had disappeared everywhere except for the peaks of the Borohoro Mountains, and the ice encapsulating Lake Balqash (Balkhash) had started to break up, uncovering the lake’s gem-colored aquamarine water. Fires, represented by red dots, burned in farmland along the rivers where farmers were likely clearing the land for spring planting. Strong wind pulled faint plumes of smoke from some of the largest fires. The west-blowing wind was also sending clouds of dust scuttling from bare patches of earth in the east across the Saryesik-Atyraū Desert south of Lake Balqash.

Seven rivers feed Lake Balqash, the second-largest lake in central Asia. The largest of these is the Ile River followed by the Qaratal River. Like a less dramatic version of the Aral Sea, Lake Balqash is gradually shrinking as water is diverted from the rivers for agriculture, hydroelectricity, and industry, says the United Nations Environment Program.

Spring was clearly settling over southern Kazakhstan by March 30, 2008. The snow had disappeared everywhere except for the peaks of the Borohoro Mountains, and the ice encapsulating Lake Balqash (Balkhash) had started to break up, uncovering the lake’s gem-colored aquamarine water. Fires burned in farmland along the rivers where farmers were likely clearing the land for spring planting.