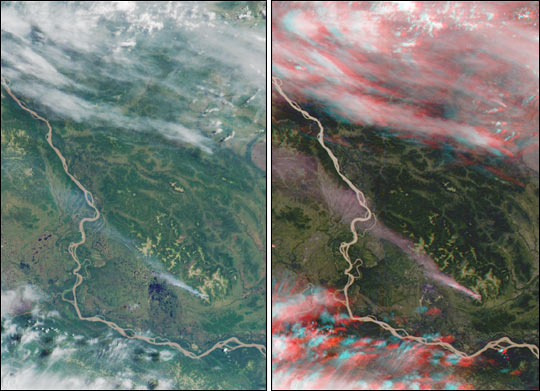 These views of western Alaska were acquired by the Multi-angle Imaging Spectroradiometer (MISR) on June 25, 2000. The images cover an area of about 150 kilometers x 225 kilometers, and have been oriented with north to the left. The left image is from the vertical-viewing (nadir) camera, whereas the right image is a stereo "anaglyph" that combines data from the forward-viewing 45-degree and 60-degree cameras. This image appears three-dimensional when viewed through red/blue glasses with the red filter over the left eye. It may help to darken the room lights when viewing the image on a computer screen.

The Yukon River is seen wending its way from upper left to lower right. A forest fire in the Kaiyuh Mountains produced the long smoke plume that originates below and to the right of image center. In the nadir view, the high cirrus clouds at the top of the image and the smoke plume are similar in appearance, and the lack of vertical information makes them hard to differentiate. Viewing the righthand image with stereo glasses, on the other hand, demonstrates that the scene consists of several vertically-stratified layers, including the surface terrain, the smoke, some scattered cumulus clouds, and streaks of high, thin cirrus. This added dimensionality is one of the ways MISR data helps scientists identify and classify various components of terrestrial scenes.