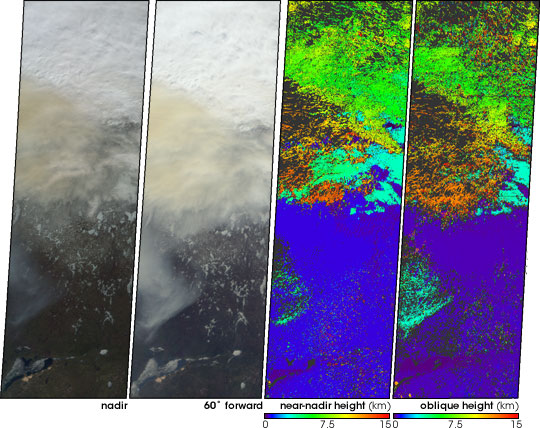 A new look at smoke from the Chisholm forest fire, which ignited on May 23, 2001, about 160 kilometers north of Edmonton in Alberta, Canada, provides confirming evidence that dense smoke can reach the upper troposphere and lower stratosphere. Scientists have proposed that there is a link between fires in northern forests and increases in stratospheric aerosols, but it is difficult to measure smoke aerosol heights directly.

These images of smoke heights from the Chisholm fire were created by stereoscopic processing of data from multiple Multi-angle Imaging SpectroRadiometer (MISR) cameras. The images were acquired on May 29, when the severity of the fire had begun to stabilize after a cold front and strong low-level winds caused rapid flame spread and an eruption of large-scale convection on May 28.

The two left-hand images are natural color views from MISR’s nadir-(looking straight down) and 60°-forward-viewing cameras. A pall of yellowish smoke is apparent both above the surface and above clouds in the top portion of the images. This area is near the junction of Canada’s Keewatin region and Northwest Territories, about 1200 kilometers northward of the original fire location. Lake Athabasca is at the lower left.

The second panel from the right is MISR’s standard stereo-height product (derived from the nadir and the two 26° cameras), while the right-hand panel is a specially-generated product using MISR’s 46°- and 60°-forward-pointing cameras. Because the smoke appears thicker at the oblique view angles, the views from those cameras provide better spatial coverage, and the estimates of aerosols are less sensitive to the underlying cloud deck.

The southern portion of the smoke cloud is at an altitude of about 3.5 kilometers; however, the smoke further to the north has risen above the tropopause (which is at an altitude of about 11 kilometers) and has even intruded into the lower stratosphere. These measurements indicate that smoke can reach heights of about 12-13 kilometers above sea level. The height fields pictured here have not been corrected for wind effects; wind-corrected heights (which have higher accuracy but sparser spatial coverage) for this smoke pall are about 0.5 kilometers higher.

This dramatic event was studied in detail by M. Fromm and R. Servranckx, and their analysis was published in an article called “Transport of forest fire smoke above the tropopause by supercell convection” in the scientific journal Geophysical Research Letters (vol. 30, no. 10) in 2003.

The Multiangle Imaging SpectroRadiometer observes the daylit Earth continuously and every 9 days views the entire globe between 82° north and 82° south latitude. The MISR Browse Image Viewer provides access to low-resolution true-color versions of these images. These data products were generated from a portion of the imagery acquired during Terra orbit 7695. The panels cover an area of 380 kilometers x 1137 kilometers, and utilize data from blocks 36 to 43 within World Reference System-2 path 40.