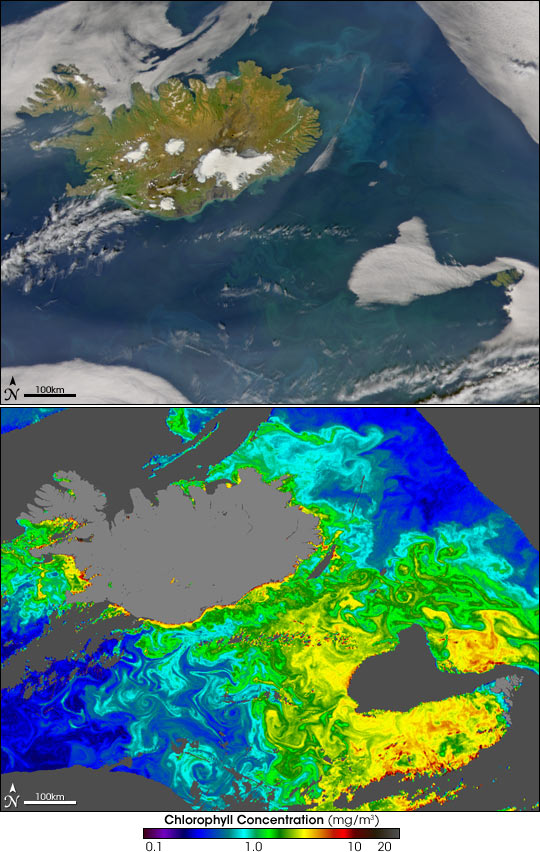 The many shades of blue and blue-green in the true-color image above (top) indicate that marine plant life (called phytoplankton) is in full bloom around Iceland. Phytoplankton form the foundation of the marine food chain and, ultimately, support almost all animal life forms in the ocean. Like land-based plants, phytoplankton require sunlight, water, carbon dioxide and nutrients in order to grow. During the summer months in the North Atlantic, the main limiting factor to growth is the availability of nutrients. Whenever a strong low-pressure system passes overhead, or a strong shift in current patterns stirs up the water from below, nutrients that have settled toward the bottom of the sea are brought up near the surface. As a result, phytoplankton can quickly reproduce by the trillions, creating beautiful patterns of light blue and turquoise that can extend for hundreds or even thousands of kilometers—features easily seen by space-based sensors.

The color of the ocean’s surface will vary according to the type of phytoplankton that is blooming. Just like their terrestrial cousins, phytoplankton contain the pigment chlorophyll, which they use for photosynthesis. The chlorophyll gives phytoplankton a greenish appearance and, therefore, many large-scale blooms take on a blue-green color when seen from above. However, some species of phytoplankton also produce a white calcium carbonate (basically chalk) exoskeleton. Known as coccolithophores, when these organisms bloom in large numbers they brighten the ocean’s surface to a pale blue or even milky white. Judging by the colors in the top image, it is possible that a variety of species of phytoplankton were in bloom around Iceland on August 11, 2004, when these Sea-viewing Wide Field-of-view Sensor (SeaWiFS) data were acquired.

Every object reflects and absorbs light in characteristic ways. By knowing how an object—like a phytoplankton bloom in the ocean—reflects and absorbs certain wavelengths of light, scientists can make accurate estimates about that object. Scientists know the chlorophyll pigment in phytoplankton reflects much of the green light while absorbing red and blue light for photosynthesis. So, by measuring precisely how much of the green light is reflected back up into space relative to how much of the blue and red light gets absorbed, scientists can produce a measure of how much chlorophyll is present at the sea’s surface. They can then produce a false-color image (bottom image), effectively mapping the concentrations of chlorophyll. The unit given in this map is milligrams of chlorophyll per cubic meter of seawater.

The large white blobs in the top image are cirrus and stratus clouds, which show up as dark gray areas of missing data in the bottom image. SeaWiFS does not have the ability to “see” through clouds.

For more information about how and why scientists monitor phytoplankton blooms all over the globe, please read What are Phytoplankton? and What is a Coccolithophore?