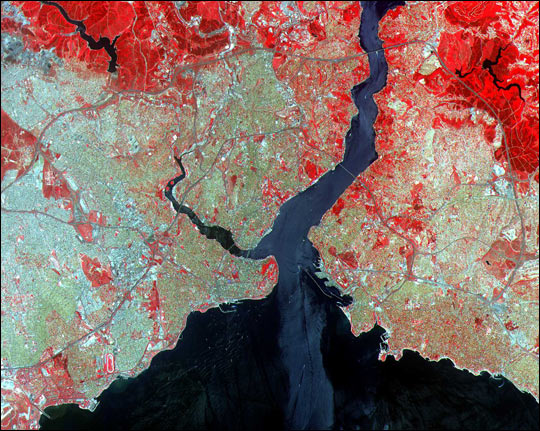 This April 7, 2000 image of Istanbul, Turkey shows a 21 by 24 km Advanced Spaceborne Thermal Emission and Reflection Radiometer (ASTER) sub-scene in the visible and infrared channels. Vegetation appears red, and urban areas blue-green. Bustling Istanbul, with its magnificent historical heritage, has spanned the divide between Europe and Asia for more than 2,500 years. Originally called Byzantium, the city was founded in the 7th century BC on the Golden Horn, an arm of the narrow Bosporus Strait, which connects the Sea of Marmara to the south, with the Black Sea to the north. Constantine I made it his capital of the Eastern Roman Empire in AD 330. As Constantinople, the strategically located city arose as the preeminent cultural, religious, and political center of the Western world. It reached the height of its wealth and glory in the early 5th century. After centuries of decline, the city entered another period of tremendous growth and prosperity when, as Istanbul, it became the capital of the Turkish Ottoman Empire in 1457. Although Turkey moved its capital to Ankara in 1923, Istanbul remains the nation's largest city with a population of over 8 million, its commercial center, and a major port. Two bridges spanning the Bosporus, and ships in the busy channel can be seen.