The historical Silk Road—or as some scholars prefer, Silk Routes, as there were several “roads”)—provided trade routes between Asia and Europe from as far back as 200 BC. Parts of the Silk Road are still used today for the transport of goods. The city of Samarkand, featured in this photograph from an astronaut on the International Space Station, is one of the oldest and most historically important cities along the Road, occupying a central position between China and Western Europe.

The city is thought to have been founded around 700 BC. In addition to its continual role as a trade center, Samarkand has been the site of many notable events in the city’s long history, including invasions by Alexander the Great (329 BC) and Genghis Khan (1220 AD). In 1370, Samarkand became the capital city of the empire of Tamerlane (or Timur); later, it was the capital city of the Uzbek Soviet Socialist Republic (1925-1930). It was named to the UNESCO World Heritage List in 2001.

Today, Samarkand is the second largest city in the Republic of Uzbekistan, formed in 1991. The urban area (image center) is located within a large oasis in the Zerafshan River Valley. Historical accounts of Samarkand describe it as a “paradise,” and its favorable climate today still supports extensive agriculture around the city's edges. In keeping with its status as a World Heritage site, the city attracts many international visitors to its historical and cultural monuments. As the capital of the Samarkand Province, it also serves as the regional government administrative center.

Astronaut photograph ISS037-E-0719 was acquired on September 13, 2013, with a Nikon D3S digital camera using a 400 millimeter lens, and is provided by the ISS Crew Earth Observations experiment and Image Science & Analysis Laboratory, Johnson Space Center. The image was taken by the Expedition 37 crew. It has been cropped and enhanced to improve contrast, and lens artifacts have been removed. The International Space Station Program supports the laboratory as part of the ISS National Lab to help astronauts take pictures of Earth that will be of the greatest value to scientists and the public, and to make those images freely available on the Internet. Additional images taken by astronauts and cosmonauts can be viewed at the NASA/JSC Gateway to Astronaut Photography of Earth. Caption by William L. Stefanov, Jacobs at NASA-JSC. 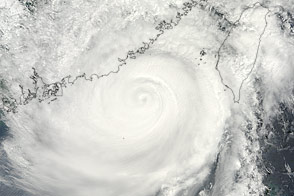