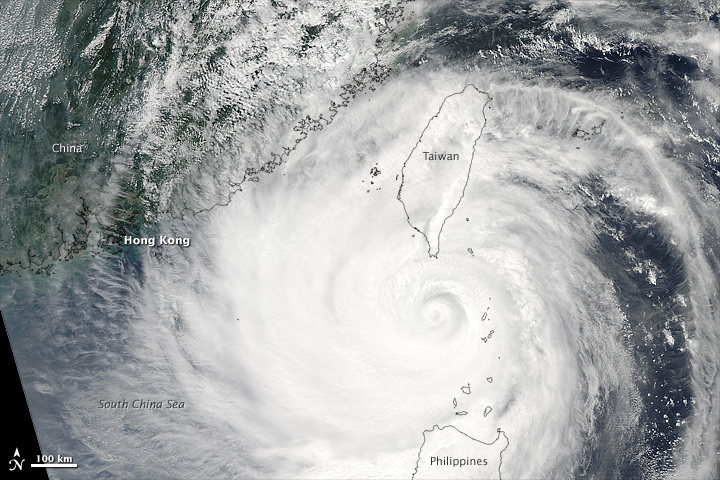 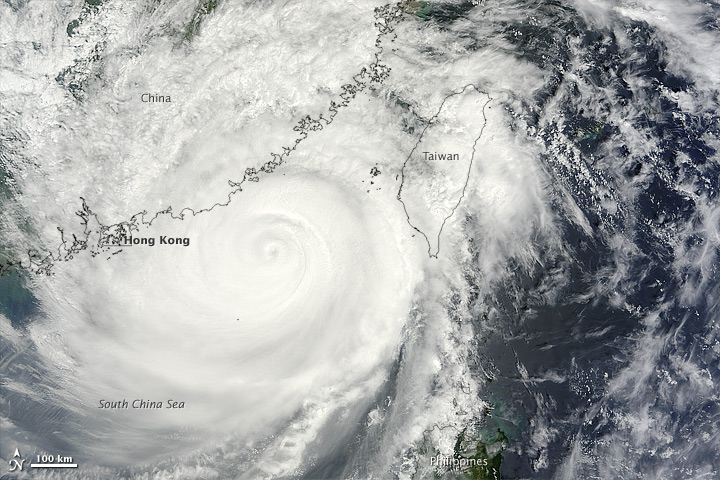 This weekend, the most powerful tropical cyclone of 2013 passed between Taiwan and the Philippines, then slammed into the southeastern coast of China on September 22. Dozens of people died in China and the Philippines due to flooding, airborne debris, and collapsed buildings.

The Moderate Resolution Imaging Spectroradiometer (MODIS) on NASA’s Aqua satellite acquired the top image at 5:10 Universal Time (1:10 p.m. local time) on September 21, 2013. At the time, Usagi was a category 4 super typhoon with sustained winds of 120 knots (140 miles or 220 kilometers) per hour.

The next day, the MODIS instrument on NASA’s Terra satellite captured the second image at 2:45 Universal Time (10:45 a.m. local time). By 6:00 UTC (2 p.m. local time) that day, just before Usagi made landfall in China’s Guangdong province, the category 2 typhoon had sustained winds of 95 knots (110 miles or 175 kilometers) per hour and a central pressure of 941 millibars (27.79 inches). Turn on the image comparison tool to see the storm pass through the Luzon Strait and approach the Chinese coast.

According to various news agency reports, at least 25 people died in China and 310,000 were displaced by Usagi. Nearly 8,500 houses collapsed, and roughly three- to five million people were affected in some way (such as power outages, etc.) In the northwestern Philippines, flood waters and landslides from drenching rains reportedly killed 18 people.

The most potent tropical cyclone of 2013 battered the Philippines and the Chinese coast.