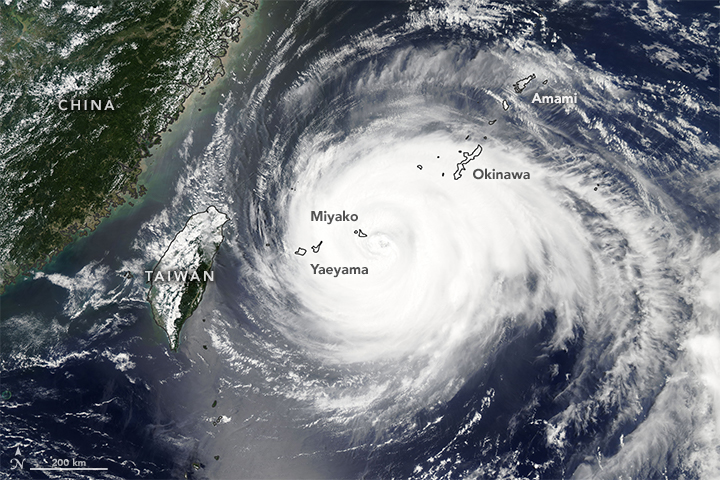 Once a super typhoon, the still powerful Typhoon Maria is expected to make landfall in eastern China on July 11, 2018, with damaging winds and heavy rains. Schools and factories in the city of Fuzhou have been closed; more than 140,000 residents have been evacuated from coastal and low-lying areas; and fishing boats have returned to port in anticipation of the typhoon’s arrival. Around 1,500 workers from Fujian Expressway Group are standing by to repair potential damage from the typhoon.

This image of Typhoon Maria was acquired on July 10, 2018, by the Moderate Resolution Imaging Spectroradiometer (MODIS) on NASA’s Aqua satellite. The storm already passed by Guam, knocking out power before passing over Japan’s southern Ryukyu Islands. The storm was headed for the northern tip of Taiwan and towards the Fujian and Zhejiang provinces of China.

Maria went through one of the fastest intensifications on record, growing from a tropical storm to a super typhoon in one day. The storm was at its most powerful on July 6 and July 8, when winds exceeded 135 knots (155 miles/250 kilometers per hour). The storm was equivalent to a category 4 hurricane on the Saffir-Simpson scale. The storm has since been downgraded to a typhoon and is expected to weaken some more as it approaches land. Even so, Typhoon Maria is formidable, bringing the potential to damage buildings and knock out power lines.