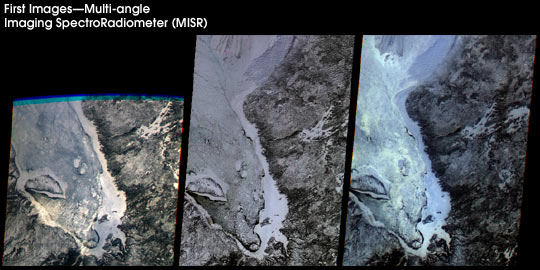 First light over James Bay, Ontario, Canada, acquired by NASA's Multi-angle Imaging SpectroRadiometer on February 24, 2000, shows this winter landscape from three of the instrument's nine cameras. The image at left captures the opening of MISR's cover and was recorded by the most oblique forward-viewing camera, which images the Earth at 70 degrees relative to a vertical plane. Several islands, including the crescent-shaped Akimiski Island, are visible in the frozen bay. The center image, acquired a few minutes later, was taken by the nadir camera, which looks straight down, and the image on the right, acquired seven minutes after first light, was taken from the most oblique aftward-viewing camera.

An increased blue tint at the oblique angles is the result of scattering of light in the atmosphere. Contrast reversals and other color and brightness variations from one angle to another are also apparent, and most likely due to variegated surface geometries and textures. Observing such changes in image content and detail from space, over a wide range of angles and with near-simultaneity, is an unprecedented approach for characterizing surface, atmospheric, and cloud properties. Capturing swaths 400 kilometers wide, MISR can detect objects as small as 275 meters in diameter.

Where in the World?