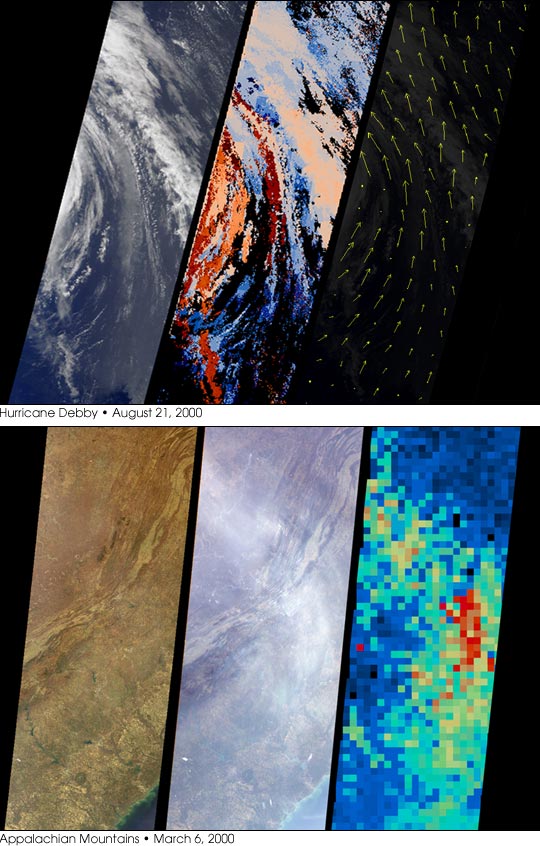 The Multi-angle Imaging Spectroradiometer (MISR) team has developed new methods for retrieving information about clouds, airborne particles, and surface properties that capitalize on the instrument's unique, multi-angle imaging approach. This illustration, based upon results contained in sample products that have just been publicly released at the Atmospheric Sciences Data Center (ASDC), highlights some of these new capabilities. The ASDC, located at NASA's Langley Research Center, is the primary processing and archive center for MISR data (http://eosweb.larc.nasa.gov/).

On August 21, 2000 MISR imaged Hurricane Debby in the Atlantic Ocean. The left panle in the top set is the MISR downward- looking (nadir) view of the storm's eastern edge. The next two panels show the results of a new approach that uses MISR's stereoscopic observations to retrieve cloud heights and winds. In the middle panel of this set, gradations from low to high cloud are depicted in shades ranging from blue to red. Since it takes seven minutes for all nine MISR cameras to view any location on Earth, and the clouds moved during this time, the data also contain information about wind speed and direction. Derived wind vectors, shown in the third panel, reveal Hurricane Debby's cyclonic motion. The highest wind speed measured is nearly 100 kilometers/hour. MISR obtains this type of information on a global basis, which will help scientists study the relationship between climate change and the three-dimensional characteristics of clouds.

MISR imaged the eastern United States on March 6, 2000. The first panel in the bottom set is the downward- looking (nadir) view, spanning the Appalachian Mountains. The middle panel is the image taken by the forward-viewing 70.5-degree camera. At this increased slant angle, the line-of-sight through the atmosphere is three times longer,and a thin haze over the Appalachians is significantly more apparent. MISR uses this enhanced sensitivity along with the variation of brightness with angle to monitor particulate pollution and to measure haze properties. The third panel shows the airborne particle (aerosol) amount, derived using new methods that take advantage of MISR's moderately high spatial resolution at very oblique angles. The aerosol results are obtained at coarser resolution than the underlying images; gradations from blue to red indicate increasing aerosol abundance. These data indicate how airborne particles are interacting with sunlight, a measure of their impact on Earth's climate.

Waves on White: Ice or Clouds