Waves on White: Ice or Clouds 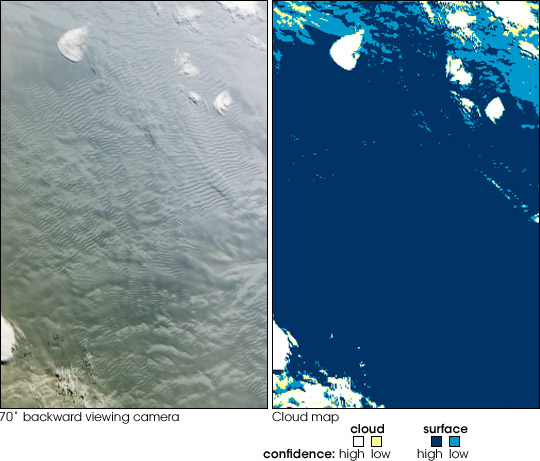 As it passed over Antarctica on December 16, 2004, the Multi-angle Imaging SpectroRadiometer (MISR) on NASA’s Terra satellite captured this image showing a wavy pattern in a field of white. At most other latitudes, such wavy patterns would likely indicate clouds. MISR, however, saw something different. By using information from several of its multiple cameras (each of which looks at the Earth’s surface from a different angle), MISR was able to tell that what looked liked a wavy cloud pattern was actually a wavy pattern on the ice surface.

In this image pair, the view from MISR’s most oblique (off-vertical) backward-viewing camera is on the left, while the color-coded image on the right shows the results of a computer program called a cloud mask, which uses MISR’s multi-angle, multi-spectral data to classify clouds and distinguish them from surface features. The colors represent the level of certainty with which the program made the classification: white for areas that it labeled as cloud with high certainty (confidence), yellow for areas it labeled as cloud with less confidence; dark blue for areas it classified as clear with high confidence, light blue for areas it classified as clear with less confidence. MISR’s cloud mask works particularly well at detecting clouds over snow and ice, but also works over ocean and land.

The rippled area on the surface, which could have been mistaken for clouds, actually shows megadunes—long, wavelike ridges of snow formed by the wind and found only on the high polar plateau. Large portions of East Antarctica are covered by megadunes, but they are difficult to see from the ground, because they are so gentle: just a few meters high, and as wide as two to five kilometers. The megadunes result from unusual snow accumulation and redistribution processes that are influenced by the prevailing winds and climate conditions. The features provide information that is useful for ice-core interpretation. MISR imagery indicates that these megadunes were stationary features between 2002 and 2004.

For more information about the scientific theory and development behind MISR’s Angular Signature Cloud Mask (ASCM), visit the MISR Website. This image area covers about 277 kilometers by 421 kilometers in the interior of the East Antarctic ice sheet.