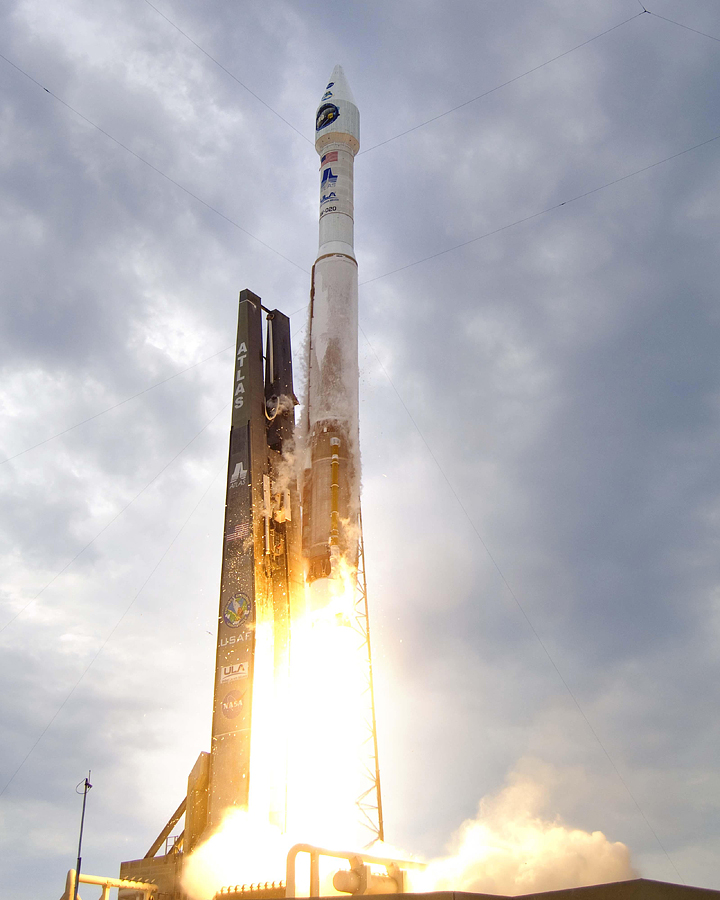 Does a permanently shadowed crater at the Moon’s South Pole harbor frozen water? Enough to supply a lunar outpost? How much ultraviolet and cosmic radiation would astronauts be exposed to if they stayed on the moon for a week or longer? Where are the best—and worst—landing sites on the Moon? These are some of the questions that NASA plans to answer with its two new lunar missions.

After waiting out a thunderstorm, NASA’s Lunar Reconnaissance Orbiter and Lunar Crater Observation and Sensing Satellite rocketed off the launch pad at Kennedy Space Center in Cape Canaveral, Florida, at 5:32 p.m. Eastern Daylight Time on June 18, 2009. This photograph captures the pair of spacecraft as they were lifting off. In under than two minutes, the spacecrafts had reached an altitude of 11.3 miles and were preparing to ditch the spent rocket that had gotten them off the ground. At 5:46, the second stage rocket fired for the first time, pushing the spacecraft through the atmosphere at more than 12,000 miles per hour. At 6:09, the rocket fired again for five minutes, catapulting the two spacecraft toward the Moon.

The Lunar Reconnaissance Orbiter hung on to the coasting rocket for about 8 minutes before separating. In four days, it will reach the Moon, where it will go into orbit just 31 miles above the surface. The Lunar Crater Observation and Sensing Satellite is holding on to the spent rocket. In October, it will hurl the empty rocket toward a crater at the South Pole and use its sensors to figure out whether the resulting debris contains water ice. Later, the spacecraft itself will crash into the crater. The debris kicked up by the collision will be so tremendous that it will probably be visible from Earth with a good amateur telescope.

The point of these lunar missions is to collect the kinds of information we need to return astronauts to the moon. But the point of going to the moon is to learn about the Earth and our solar system (and ultimately, the universe). More than four billion years ago, as our solar system was forming, a planetary object roughly the size of Mars smacked into the Earth. The collision shattered the small planet and probably vaporized the upper layers of Earth’s surface. The debris—part Earth, part destroyed planet—remained in orbit around the Earth. Eventually, the debris aggregated into the Moon. If this theory, widely accepted among astrophysicists, is correct, then the formation of the Earth is inextricably tied to the formation of the Moon. And because the Moon’s surface has not been endlessly remodeled by plate tectonics, volcanoes, or erosion, it should be able to tell us things about how the Earth came to be that our planet itself never will.