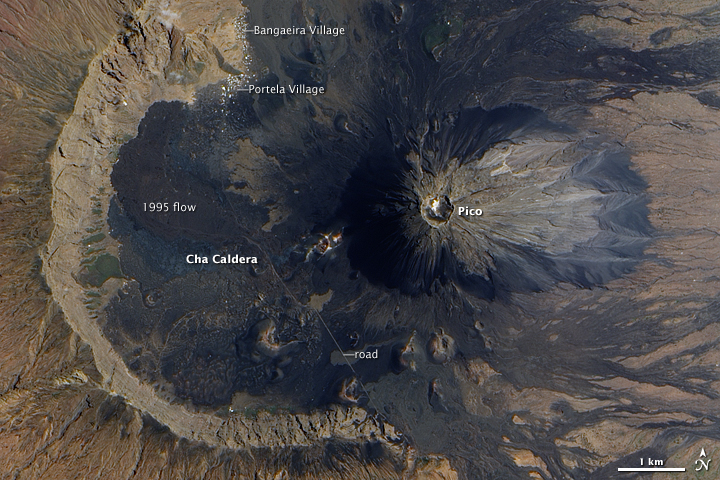 Fogo—fire—is an apt name for this imposing volcanic island. One of the Cape Verde Islands located roughly 640 kilometers off the westernmost tip of Africa, Fogo received its name from Portuguese colonists around 1500 AD. The volcano was almost continuously active from that time until about 1760, said the Smithsonian Global Volcanism Program.

The Advanced Land Imager on NASA’s EO-1 satellite captured this detailed image of the volcano on June 10, 2009. The volcano’s most distinctive feature, its nine-kilometer wide caldera, Cha Caldera, is shown in this image. The crater wall in the west towers one kilometer above the crater floor. The eastern half of the crater wall is gone, erased in a massive collapse deep in its ancient history.

Evidence of the volcano’s more recent eruptive history is written on the surface of the crater as well. In the center of the crater, a steep cone named Pico rises about 100 meters above the crater rim (more than a kilometer from the crater floor). The young peak reaches 2,829 meters (9,281 feet) above sea level, making it the island’s highest point.

Dark trails of hardened lava from the volcano’s most recent eruptions stream out of the crater east into the Atlantic Ocean. The volcano last erupted in 1995. The sepia stream of lava from that eruption is pooled near the crater rim west of Pico.

Remarkably, the crater is inhabited. A straight road cuts between the crater wall and Pico, ending near the vent that erupted in 1995. Bright white dots on the north side of the crater are villages. Residents of the Cha Caldera evacuated during the eruption.

The volcano was almost continuously active from the 1500s until 1760.