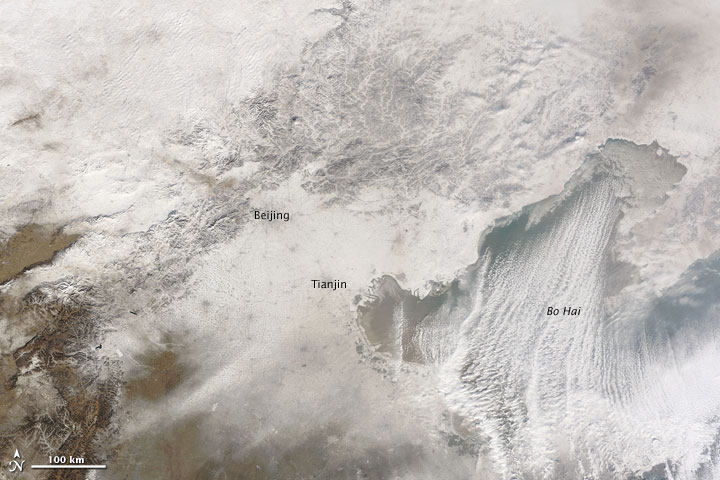 Some 2 million schoolchildren in the Beijing region enjoyed an extra day off at New Year’s in January 2010 while authorities put some 300,000 people to work clearing streets. Up to 30 centimeters (12 inches) of snow fell on the capital city of Beijing and nearby port city of Tianjin, closing schools, clogging roads, and canceling flights. Although not as bad as the 2008 freeze that ruined travel plans for millions of Chinese trying to visit family for the lunar new year, this snowstorm was described as the heaviest snow to fall on Beijing in almost 60 years.

The Moderate Resolution Imaging Spectroradiometer (MODIS) on NASA’s Terra satellite captured this true-color image on January 4, 2010. Snow cover encircles Bo Hai and extends to the north and west of that water body. Snow also covers Beijing, Tianjin, and a constellation of smaller settlements. The large cities leave big gray splotches on the blanket of snow, and the smaller cities make small gray dots. Snow caps the mountains north and west of Beijing, but the snow cover gradually fades southwest of Beijing and Tianjin. Cloud streets—clouds arranged in neat rows—similar to those observed over Hudson Bay and the Great Lakes float over Bo Hai.

Unlike the deep freeze of 2008, this storm was not expected to cause weeks-long fuel shortages for northern China, although disruptions to transportation and damage to greenhouses were expected to raise food prices. Temperatures in Beijing were expected to fall to -18 degrees Celsius (-0.4 degrees Fahrenheit) on the night of January 5, 2010, and some of the northernmost parts of China might experience temperatures as low as -32 degrees Celsius (-25.6 degrees Fahrenheit) by the following morning.

Up to 30 centimeters (12 inches) of snow fell on Beijing and the nearby port city of Tianjin in early January 2010. The snow was reportedly the heaviest to fall in the Chinese capital city since 1951. Record-breaking snow fell in South Korea, as well.