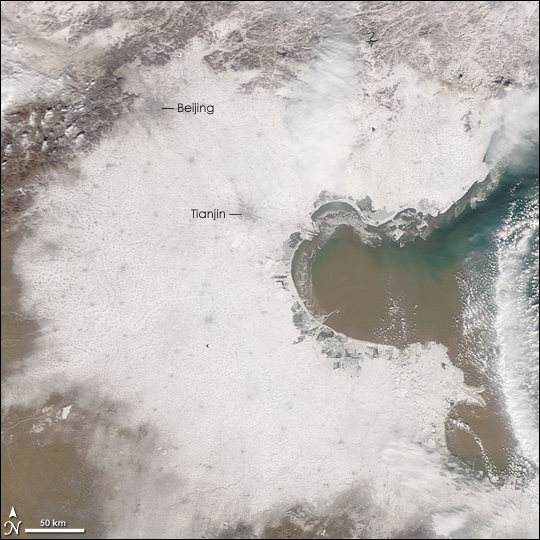 Winter snow painted the North China Plain white in a storm that snarled traffic on February 6, 2006. The Moderate Resolution Imaging Spectroradiometer (MODIS) on NASA’s Terra satellite captured this image the following day. The snow highlights how densely populated this region is. Cities are dark spots against the fresh white snow. The largest city shown here is Beijing, but dark dots of varying sizes cover the plain, connected in places by thin, barely perceptible lines that are probably roads.

In the large image, the snow extends far to the south over the Yellow River Valley. In the south, the most obvious features are not cities, though they are clearly visible, but intricate grids probably created by canals, roads, and farmland. Falling immediately after Chinese Lunar New Year, the snow was seen as a token of good luck, said news reports.

The large image provided above has a resolution of 250 meters per pixel. The MODIS Rapid Response Team provides daily images of the region in a variety of resolutions.