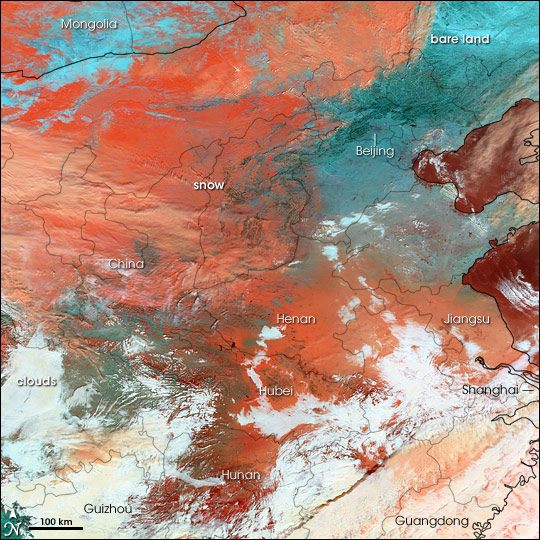 Though the days may be different, gathering with family and friends for major holidays is the same the world over. China’s biggest holiday, the Lunar New Year, prompts a mass migration (the largest on the planet, said BBC News) as tens of millions travel home. In 2008, however, travel proved nearly impossible. Snow storms closed roads and railroads across eastern, central, and southern China, reported BBC News.

This image, captured by the Moderate Resolution Imaging Spectroradiometer (MODIS) on the morning of January 29, 2008, shows how extensive the snow cover is. The image encompasses most of eastern China, save the northernmost provinces and the cloud-covered southern coast. From north to south, nearly the entire country is covered in snow.

Unlike a photo, which uses the visible light that the human eye sees, this image includes both infrared light and visible light to provide a contrast between snow and clouds. Snow is red-orange, while clouds are white and peach. Some of the worst-affected provinces, such as Guangdong along the southern coast, were still under cloud cover when MODIS captured this image. Other areas, such as the North China Plain (where Beijing is located), are snow-free. The ground is green-blue, the shade of bare or sparsely vegetated earth in this type of image.

The snow storms started on January 10, spreading snow over 14 provinces and affecting approximately 80 million people, said BBC News on January 29. The snow destroyed crops and homes and led to power outages, BBC said. Coal shortages, made worse by the difficulty of transporting coal on snowy roads, caused additional power outages. Some of the more severely affected provinces are labeled in this image. These provinces are in the south, where snow is unusual.