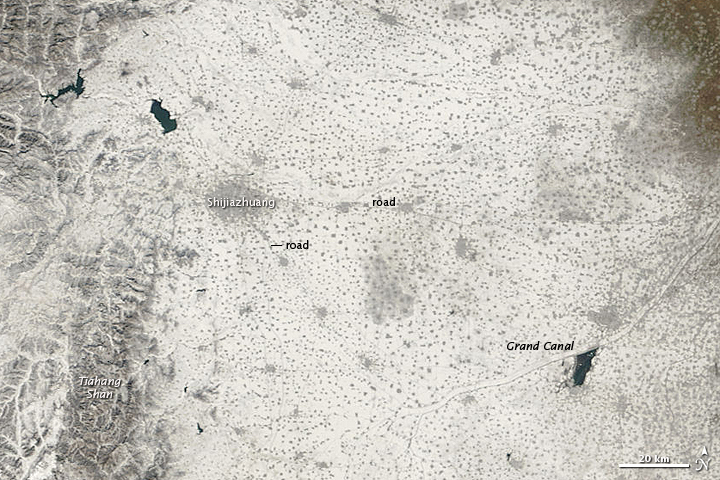 On the ground, snow is an equalizer. It covers everything with a uniform blanket of white, making both the dingiest trash heap and the loveliest garden a pristine field of white. But from space, snow highlights features that would ordinarily blend into the landscape. This photo-like image, captured by the Moderate Resolution Imaging Spectroradiometer (MODIS) on NASA’s Terra satellite, provides an example.

The image is from November 17, 2009, days after a large snow storm swept over China, covering much of the country in white. This image shows part of the North China Plain near the city of Shijiazhuang. On the plain, the snow is white where it fell on fields or natural landscapes. Artificial surfaces in cities, towns, and roads are gray. While the larger cities and towns would be visible on a day without snow or clouds, many of the smaller towns and roads would be difficult to distinguish from the surrounding landscape. In the snow, however, small towns and the roads that connect them stand out clearly.

The storm that brought the snow came unusually early in the winter. The snowfall, the heaviest in decades, killed at least 32 people, destroyed 300,000 hectares of crops, and caused more than 15,000 buildings to collapse, reported Xinhua, the Chinese news agency. The storm closed roads and curtailed train and air travel. Airports in many large cities, including Shijiazhuang, closed.

The large image provided above is the highest resolution version of the image. The image is available in additional resolutions from the MODIS Rapid Response Team.