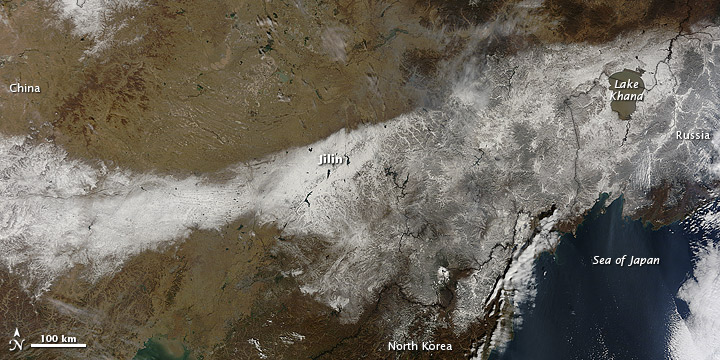 Snow fell over a wide area of northeastern China in late October 2012. The Moderate Resolution Imaging Spectroradiometer (MODIS) on NASA’s Terra satellite captured this natural-color image on October 23, 2012. As MODIS passed overhead, a fresh layer of snow stretched from the coast bordering the Sea of Japan westward about 1,440 kilometers (900 miles).

The band of snow encompassed Jilin City, the former capital of the province of the same name. News reports discussed heavy, wet snow falling across Jilin Province on October 22, 2012. AccuWeather reported that the storm left some regions with slushy streets and snow on grassy areas. Snow weighed down trees still loaded with leaves. On October 22, AccuWeather reported that the storm that dropped snow across northeastern China also produced rain over the Korean Peninsula, and was moving eastward toward northern Japan and the Kamchatka Peninsula.