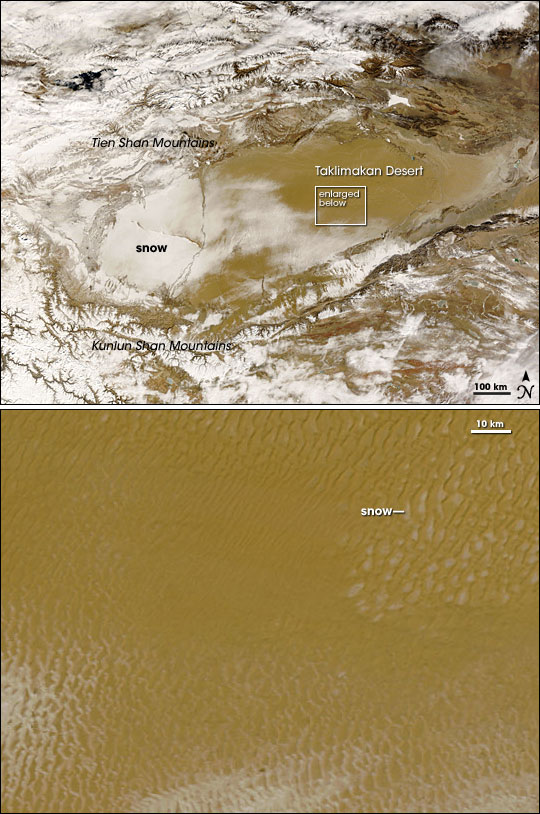 Dust? Certainly. Clouds? Sometimes. Snow? Almost never. Snow is a rare sight in China’s Taklimakan Desert, and yet, on February 19, 2008, snow is exactly what the Moderate Resolution Imaging Spectroradiometer (MODIS) on NASA’s Terra satellite saw. The top image shows the larger area observed by MODIS; the bottom image shows a close-up view (at the full resolution of 250 meters) of part of the desert, along the eastern edge of the snow cover.

In the top image, the western half of the basin is coated with a layer of white. Brushes of orange are visible through the snow, hinting that the snow cover is little more than a fragile shell, and the snow gradually diminishes toward the east. Not surprisingly, the mountains that enclose the sea of sand—the Tien Shan in the north and the Kunlun Shan in the south—are also covered with snow; the white-capped peaks show the dendritic (branching) pattern typical of such rugged terrain.

The winter of 2007-2008 was unusually severe in much of Asia. Immediately west of the Taklimakan, the snow and cold weather caused a humanitarian disaster in Afghanistan and Tajikistan. As of February 16, 926 people had died in Afghanistan as a result of the worst winter in living memory, reported Reuters. Neighboring Tajikistan faced power shortages as frozen rivers limited the capacity of hydroelectric plants. To the east of Taklimakan, China was hammered with heavy snow that destroyed buildings and crops and shut down transport. The snow was the worst in five decades and caused about 15.3 billion dollars of damage, said the Xinhua News Agency on February 16.

Though not a disaster as elsewhere, the snow in the Taklimakan Desert itself set a record. In late January, several days of snow covered the entire basin with snow for the first time on record. The snow shown in this image came from a subsequent storm.

The Taklimakan Desert is one of the world’s largest sandy deserts. Water flowing into the Tarim Basin has no outlet, so over the years, sediments have steadily accumulated, and in parts of the desert, sand piles 300 meters (roughly 1,000 feet) high. The bottom image shows the interplay between snow and sand dunes. In the areas of thin snow cover, the snow clings to the west-facing slopes while leaving the east-facing slopes snow-free.