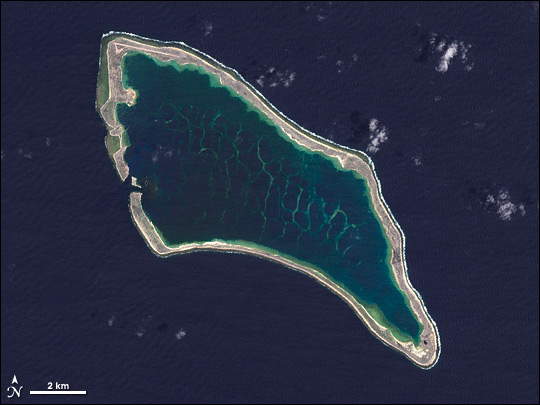 At the end of January 2008, Kirabtai, an island nation in the tropical Pacific Ocean southwest of Hawaii, established the world’s largest marine protected area. The reserve surrounds the nation’s central island group, the Phoenix Islands. The new Phoenix Islands Protected Area includes an archipelago of 8 coral atolls and 2 submerged reef systems, along with underwater mountains and deep sea habitat; it creates a 60-nautical-mile zone around each of the atolls, where commercial fishing will be prohibited.

This image from NASA’s Landsat-7 satellite on February 6, 2000, shows Kanton Island (sometimes called Canton Island), the largest of the atolls in the Phoenix Island archipelago. A narrow ring of sand anchored by scrubby vegetation encircles a turquoise-streaked lagoon. A ring of white surf is breaking on a shallowly submerged, fringing reef that outlines the island’s perimeter. Kanton is the only one of the Phoenix atolls with a permanent population. An air strip is visible at the northwestern tip of the atoll; boats gain passage to the lagoon through an inlet on the western shore.

Kirabati developed the protected area after several years of collaborative research with the New England Aquarium and Conservation International. Field surveys documented some of the healthiest and most important seabird nesting sites in the Pacific, and scientists found numerous nesting sites for endangered sea turtles. More than 500 species of fish—some of them new to science—and 120 species of coral were cataloged during reef dives. The New England Aquarium and Conservation International are helping to set up an endowment that will compensate Kiribati for maintaining the reserve and for foregoing the income the country would normally receive from issuing commercial fishing licenses to foreign countries.