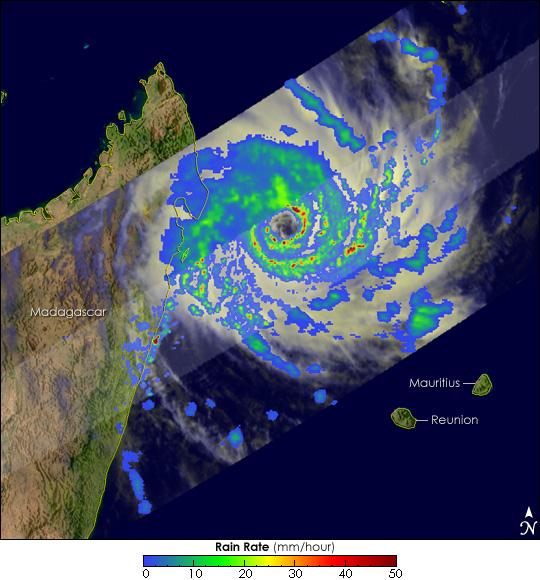 Cyclone Ivan tracked across the southern Indian Ocean as tropical cyclone season near its peak in mid-February 2008. The storm developed into a powerful Category 4 cyclone that devastated parts of Madagascar as it crossed the island between February 17 and February 19. Initial government reports said that 26 people died in the storm, with more than 300,000 affected by strong winds, heavy rains, and floods, said the Red Cross on February 27.

This image, made with data from the Tropical Rainfall Measuring Mission (TRMM) satellite, shows Cyclone Ivan on February 16 at 9:21 a.m., local time (6:21 UTC) as the storm was intensifying to its maximum strength. At the time, Ivan’s winds reached 185 kilometers per hour (115 miles per hour or 100 knots), and would peak at 213 km/hr (132 mph or 115 knots) just a few hours later. The image shows the horizontal pattern of rain intensity within the storm. Bands of heavy rain, shown in red, circle a large, well-defined eye. The storm is symmetrical, a sign of its tremendous strength. Slow-moving Ivan would make landfall the morning after this image was taken.

The image was made with data from several sensors flying on the TRMM satellite. Rain rates in the center swath are from the TRMM Precipitation Radar, the first precipitation radar in space, while rain rates in the outer swath are from the TRMM Microwave Imager. The rain rates are overlaid on infrared data from the TRMM Visible Infrared Scanner. The Tropical Rainfall Measuring Mission satellite was placed into service in November 1997. From its low-Earth orbit, TRMM can provide valuable images and information on tropical cyclones around the Tropics using a combination of passive microwave and active radar sensors. TRMM is a joint mission between NASA and the Japan Aerospace Exploration Agency, (JAXA).