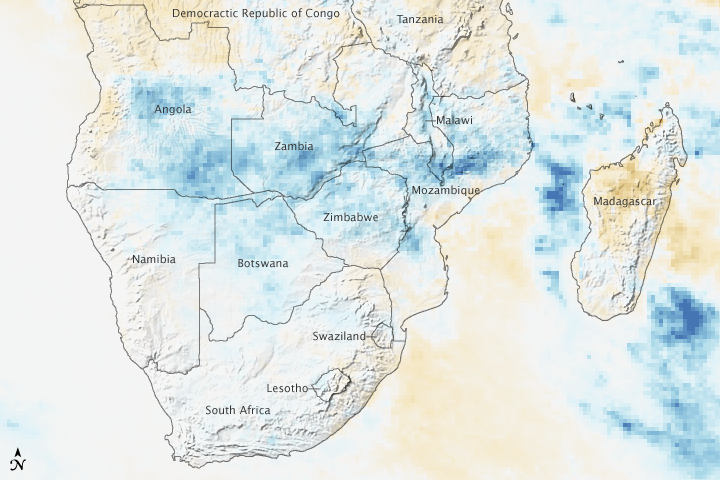 Heavier-than-normal rainfall in January 2008 brought flooding to parts of southern Africa. The hardest hit areas included Zimbabwe, Zambia, Malawi, and Mozambique. Up to 120,000 people were displaced by the flooding, and 45 fatalities were reported, said news reports. The floods were also expected to have a severe impact on crops.

This image shows the unusually heavy rainfall that caused the floods. The image compares the total rainfall measured between December 24, 2007, and January 25, 2008, to the average total measured during the same period from 1998 through 2007. Nearly the entire region experienced wetter-than-normal conditions in January 2008. The most intense rain fell in a line over the flooded Zambezi River catchment area in Mozambique, Zambia, and Angola.

December and January are part of the wet season in southern Africa. Rains come as the Intertropical Convergence Zone, a band of near-perpetual thunderstorms that shifts north and south of the equator with the seasons, moves south during the Southern Hemisphere summer. In addition to the regular rainy season, rainfall in January 2008 may have been enhanced by La Niña, which cools ocean waters in the central Pacific and changes rainfall patterns across the world. Another factor that potentially contributed to the unusually intense rain in January 2008 is a 30-to-60 day weather pattern known as the Madden-Julian Oscillation. The Madden-Julian Oscillation is a large, slow-moving area of enhanced thunderstorm activity that moves eastward from the Indian Ocean into the Pacific and can affect rainfall over Africa.

The image was made with data from the Multi-satellite Precipitation Analysis at NASA Goddard Space Flight Center. In the analysis, rainfall estimates from many satellites are calibrated with data from the Tropical Rainfall Measuring Mission (TRMM) satellite to monitor daily rainfall over the global tropics. TRMM was placed into service in November 1997. From its low-Earth orbit, TRMM has been measuring rainfall over the global tropics using a combination of passive microwave and active radar sensors. TRMM is a joint mission between NASA and the Japanese space agency, JAXA.