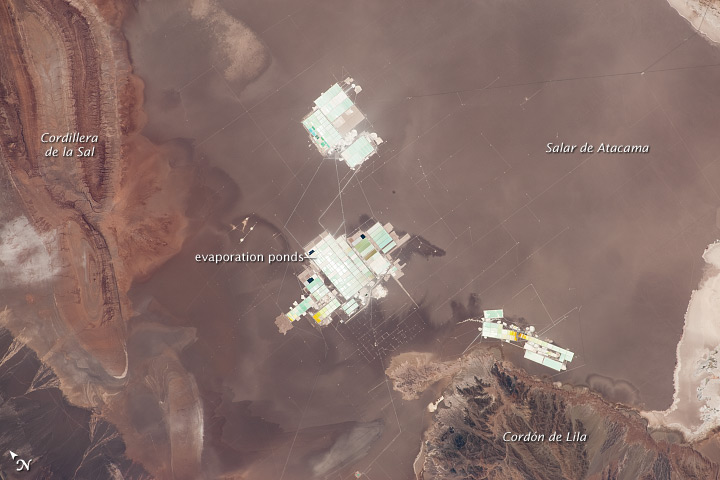 The Salar de Atacama in Chile is an enclosed basin with no drainage outlets. (Salar is Spanish for “salt flat.”) The salar is located in the southern half of the Atacama Desert; with no historical or current records of rainfall in some parts of this desert, it is considered to be one of the driest places on Earth.

While the grey-brown surface of the salar is flat and desiccated, mineral-rich brines—water with a high percentage of dissolved salts—are located below the surface. The subsurface brines of the Salar de Atacama are particularly rich in lithium salts. Lithium is an essential component of advanced batteries and medicines.

The brines are pumped to the surface through a network of wells and into large, shallow evaporation ponds; three such evaporation facilities are visible in the center of the image. Color variations in the ponds are due to varying amounts of salts relative to water. The dry and windy climate enhances evaporation of the water, leaving concentrated salts behind for extraction of the lithium.

This astronaut photograph illustrates the central portion of the Salar de Atacama. It is bounded by brown to grey-brown folded and faulted rock layers of the Cordillera de la Sal to the northwest (image upper left) and darker bedrock of the Cordón de Lila to the south (image lower right).

Astronaut photograph ISS022-E-12224 was acquired on December 15, 2009, with a Nikon D2Xs digital camera fitted with a 180 mm lens, and is provided by the ISS Crew Earth Observations experiment and Image Science & Analysis Laboratory, Johnson Space Center. The image was taken by the Expedition 22 crew. The image in this article has been cropped and enhanced to improve contrast. Lens artifacts have been removed. The International Space Station Program supports the laboratory to help astronauts take pictures of Earth that will be of the greatest value to scientists and the public, and to make those images freely available on the Internet. Additional images taken by astronauts and cosmonauts can be viewed at the NASA/JSC Gateway to Astronaut Photography of Earth. Caption by William L. Stefanov, NASA-JSC.