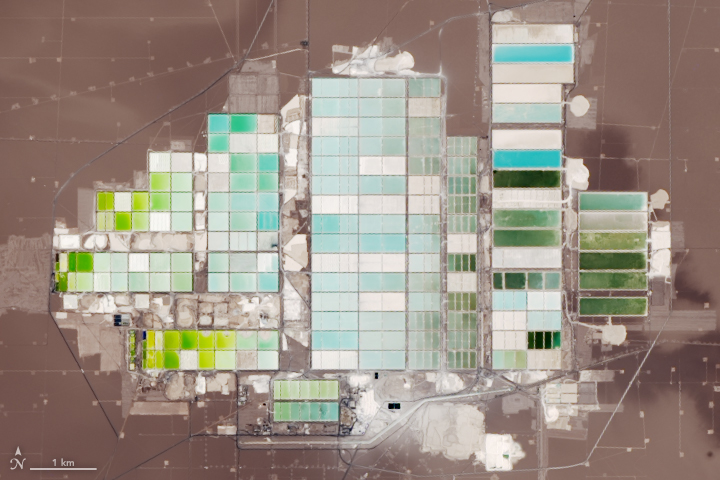 With the International Energy Agency forecasting that the number of electric motor vehicles will skyrocket from about 3 million in 2018 to 125 million by 2030, it is a good bet that more of these vividly colored evaporation ponds will dot deserts in South America in the future. That’s because they are a key source of lithium.

Makers of electric vehicles, laptops, cell phones, and other gadgets rely heavily on lithium for rechargeable batteries. Lithium is also used in ceramics, glass, industrial grease, and medication. With 29 percent of the world’s reserves, Chile’s Salar de Atacama—an enclosed basin with no drainage outlets—is the world’s largest source of lithium. Nearby areas in Bolivia and Argentina also have large reserves.

While the surface of the salar (Spanish for salt flat) is almost always dry, a large reserve of lithium-rich brine lurks below the surface of the ancient sea bed. A combination of snowmelt from nearby mountains and hydrothermal fluids associated with volcanic activity naturally replenishes the aquifer. 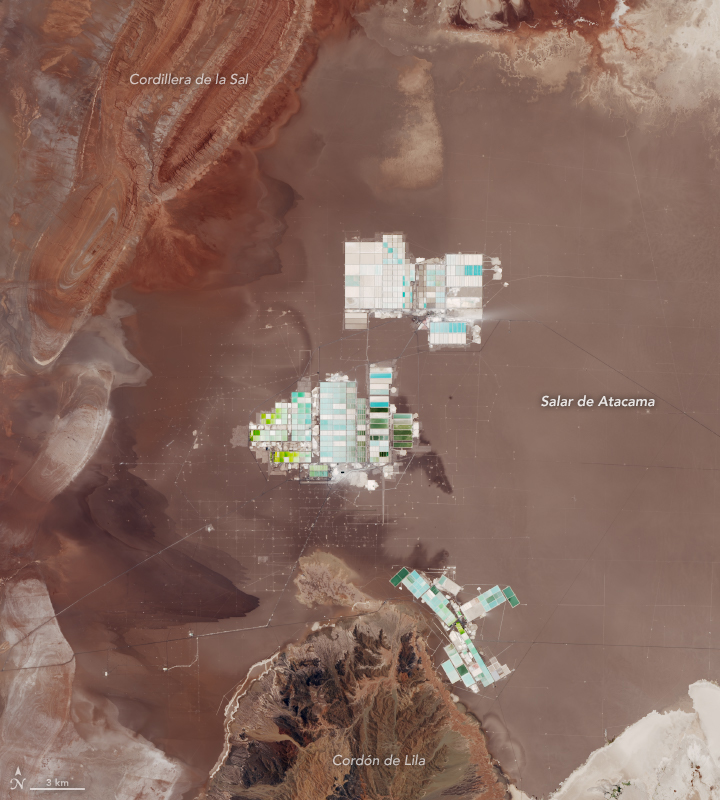 Companies pump brine to the surface and shunt it through a network of canals to shallow evaporation ponds lined with plastic. Then the region’s relentlessly dry, sunny, and windy weather evaporates the brine and leaves behind deposits of lithium and other salts. Tanker trucks carry concentrated lithium to processing facilities near the port city of Antofagasta.

On November 4, 2018, the Operational Land Imager (OLI) on Landsat 8 captured this image of evaporation ponds. Color variations in the ponds are due to varying concentrations of salt in the water; lighter blue ponds have higher concentrations of lithium. The network of canals and hundreds of pumps around the evaporation ponds form the grid patterns around the clusters of ponds.

As the number of ponds at Salar de Atacama increases over time to meet the rising demand for lithium, there are concerns and conflicts brewing about how much groundwater companies operating in this area are using.