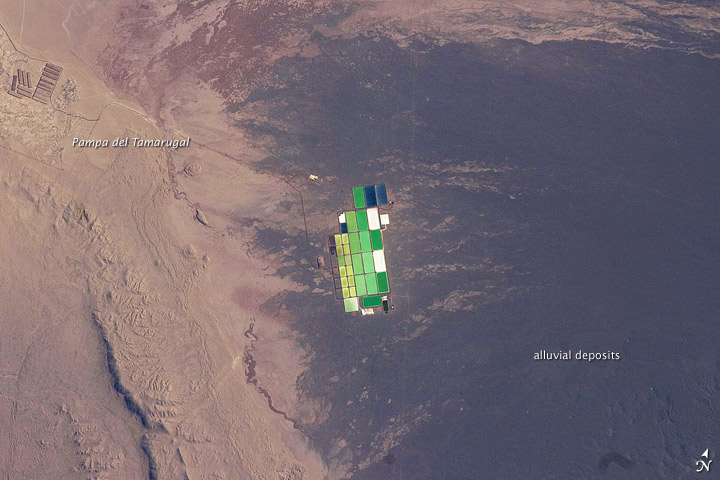 Brightly colored solar evaporation (salt) ponds in a desert landscape give this astronaut photo an unreal quality. The ponds sit near the foot of a long alluvial fan in the Pampa del Tamarugal, the great hyper-arid inner valley of Chile’s Atacama Desert. The alluvial fan sediments are dark brown, and they contrast sharply with tan sediments of the Pampa del Tamarugal.

Nitrates and many other minerals are mined in this region. A few extraction pits and ore dumps are visible at upper left. Iodine is one of the products from mining; it is first extracted by heap leaching. Waste liquids from the iodine plants are dried in the tan and brightly colored evaporation ponds to crystallize nitrate salts for collection. The recovered nitrates are mainly used for fertilizer for higher-value crops. They are also used in the manufacture of pharmaceuticals, explosives, glass, and ceramics, as well as in water treatment and metallurgical processes.

Astronaut photograph ISS019-E-14473 was acquired on May 5, 2009 with a Nikon D2X digital camera fitted with a 400 mm lens, and is provided by the ISS Crew Earth Observations experiment and Image Science & Analysis Laboratory, Johnson Space Center. The image was taken by the Expedition 19 crew. The image in this article has been cropped and enhanced to improve contrast. Lens artifacts have been removed. The International Space Station Program supports the laboratory to help astronauts take pictures of Earth that will be of the greatest value to scientists and the public, and to make those images freely available on the Internet. Additional images taken by astronauts and cosmonauts can be viewed at the NASA/JSC Gateway to Astronaut Photography of Earth. Caption by M. Justin Wilkinson, NASA-JSC.