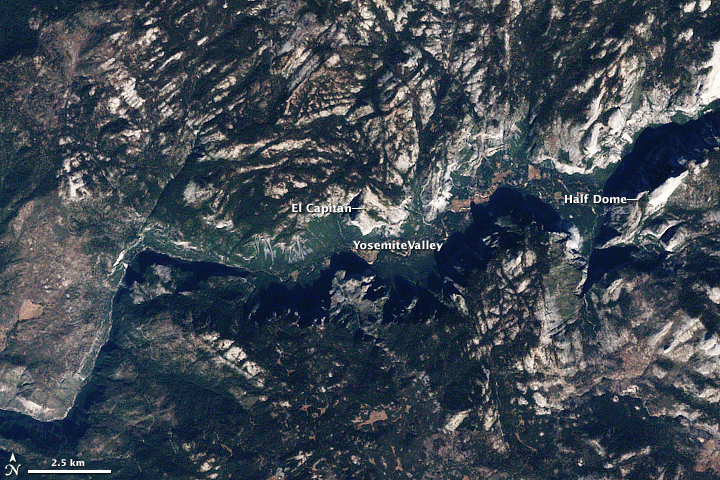 Naked summits alternate with forested lowlands in Yosemite Valley, part of California’s Yosemite National Park. During the Pleistocene Ice Age, glaciers sculpted the underlying rocks in this region, leaving behind canyons, waterfalls, rugged peaks, and granite domes. As the ice retreated, forests grew, but forests only extend as high as 2,900 meters (9,500 feet) above sea level. Above the tree line are rocky landscapes with sparse alpine vegetation. So from the sky, Yosemite Valley appears as a light-and-dark patchwork of forest, rock, and shadow.

The Enhanced Thematic Mapper Plus on NASA’s Landsat 7 satellite captured this true-color image of part of Yosemite Valley on August 18, 2001. The valley runs roughly east-west, and tall granite peaks lining the valley’s southern side cast long shadows across the valley floor. On the valley’s northern side, steep slopes appear almost white. Along the valley floor, roadways form narrow, meandering lines of off-white, past parking lots, buildings, and meadows.

Near the right edge of the image is Half Dome, a granite peak visible (from the ground) throughout much of eastern Yosemite Valley. Towering almost 1,525 meters (5,000 feet) above the valley floor and 2,680 meters (8,800 feet) above sea level, Half Dome appears as its name suggests—a large dome of rock sliced vertically down the middle. Once considered “perfectly inaccessible,” Half Dome was successfully scaled in 1875, and has become a popular destination for determined hikers.