7.3-Magnitude Quake off the Honduras Coast 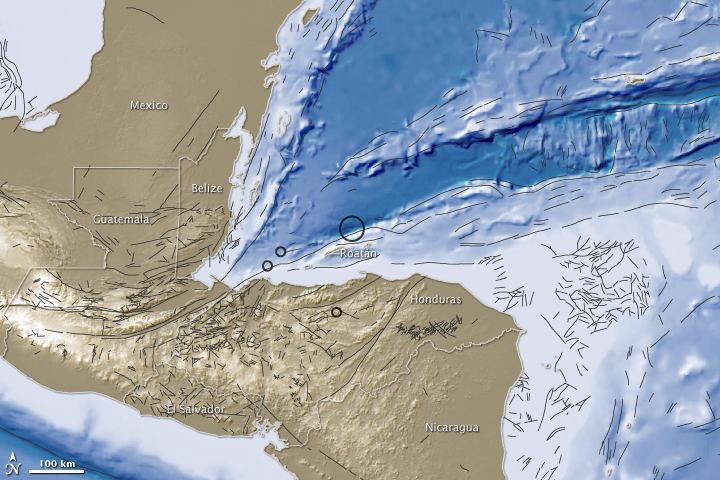 A 7.3-magnitude earthquake struck just off the coast of Honduras at 3:24 a.m. local time (08:24 UTC) on May 28, 2009. According to a Reuters report issued the same day, the offshore earthquake damaged buildings across northern Honduras, crushing some residents as they slept. The known death toll from the quake stood at five, and that number was expected to rise as remote villages reported their casualties.

This image shows the land elevation and ocean depth for Honduras and neighboring countries. The elevation data are from NASA’s Shuttle Radar Topography Mission (SRTM) and the depth data are from the National Oceanic and Atmospheric Administration (NOAA). Both on land and in the water, the lighter the color, the higher the land surface or ocean floor.

Circles indicate the locations of earthquake activity on May 28-29, 2009. The 7.3-magnitude quake occurred 64 kilometers (39 miles) northeast of the island of Roatán, and 310 kilometers (195 miles) north-northeast of Tegucigalpa, the capital of Honduras. Over the next 30 hours, three aftershocks followed, all within the magnitude 4 range.

Fine black lines indicate fault line data from the U.S. Geological Survey (USGS). Fault lines appear throughout this scene, both on land and under water. As a tectonic plate map from the USGS indicates, Central America rests on the Caribbean Plate, which is sandwiched between the much larger North American and South American Plates. In addition, this region is part of the Pacific Ring of Fire, a seismically active area surrounding the Pacific, Cocos, and Nazca Plates.

This image shows the topography and bathymetry of the region surrounding the earthquakes that occurred on May 28-29, 2009. Red circles indicate quake locations, and fine black lines indicate fault lines.

7.3 Magnitude Quake off the Honduras Coast